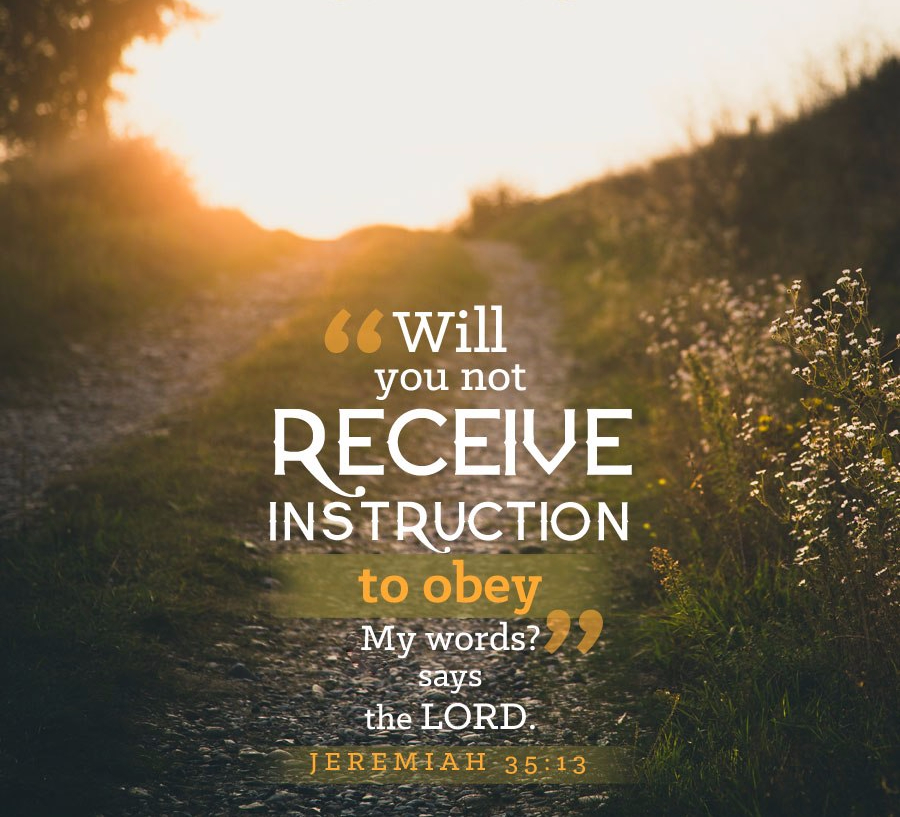 35:1 The word which came to Jeremiah from the Lord in the days of Jehoiakim the son of Josiah, king of Judah, saying, 2 “Go to the house of the Rechabites, speak to them, and bring them into the house of the Lord, into one of the chambers, and give them wine to drink.”

6 But they said, “We will drink no wine, for Jonadab the son of Rechab, our father, commanded us, saying, ‘You shall drink no wine, you nor your sons, forever. 7 You shall not build a house, sow seed, plant a vineyard, nor have any of these; but all your days you shall dwell in tents, that you may live many days in the land where you are sojourners.’ 8 Thus we have obeyed the voice of Jonadab the son of Rechab, our father, in all that he charged us, to drink no wine all our days, we, our wives, our sons, or our daughters, 9 nor to build ourselves houses to dwell in; nor do we have vineyard, field, or seed. 10 But we have dwelt in tents, and have obeyed and done according to all that Jonadab our father commanded us. 11 But it came to pass, when Nebuchadnezzar king of Babylon came up into the land, that we said, ‘Come, let us go to Jerusalem for fear of the army of the Chaldeans and for fear of the army of the Syrians.’ So we dwell at Jerusalem.”

The history of the Rechabites includes a pattern of instruction from their father, Rechab, not to drink wine or live in houses, but to be sober and live in tents their entire lives.  The only reason they are in Jerusalem is because of the attack of Nebuchadnezzer.  They have always obeyed the command of their father, and refused wine when Jeremiah offered it to them.

12 Then came the word of the Lord to Jeremiah, saying, 13 “Thus says the Lord of hosts, the God of Israel: ‘Go and tell the men of Judah and the inhabitants of Jerusalem, “Will you not receive instruction to obey My words?” says the Lord. 14 “The words of Jonadab the son of Rechab, which he commanded his sons, not to drink wine, are performed; for to this day they drink none, and obey their father’s commandment. But although I have spoken to you, rising early and speaking, you did not obey Me. 15 I have also sent to you all My servants the prophets, rising up early and sending them, saying, ‘Turn now everyone from his evil way, amend your doings, and do not go after other gods to serve them; then you will dwell in the land which I have given you and your fathers.’ But you have not inclined your ear, nor obeyed Me. 16 Surely the sons of Jonadab the son of Rechab have performed the commandment of their father, which he commanded them, but this people has not obeyed Me.” ’

This example of the Rechabites is then used to show the inhabitants of Judah the correct way to obey the Lord.  He sent leaders and prophets to warn them of the impending doom brought on by their disobedience and idolatry.  However, they have not responded with repentance or contrition.  Instead, they have continued to rebel.  Therefore, all the warnings are coming true, and they will be doomed.  However, the Rechabites will be saved.  In which camp do you dwell?  Are you a rebellious child, living according to your own desires and whims?  Is judgment looming over you?  Or are you a Rechabite-type, living the commands of God and walking in blessings?  Live the God-like life, and know that the Godly blessings will come.  Above that, though, be sure to obey God, if for no other reason than that obedience allows one to dwell in His presence.  The Rechabites dwelt in tents and drank no wine so that they could tabernacle with God.  Obedience leads to divine relationship with the Great God Jehovah.