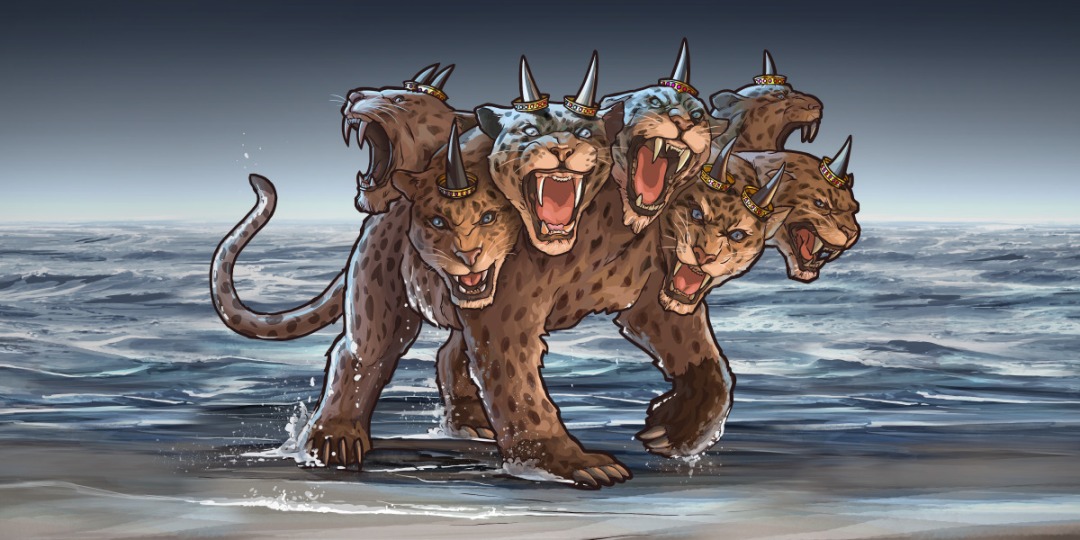 The dragon, Satan, has just pursued the woman who gave birth to the Child of Promise, and then a beast rises up from the sea. This is the account of this new development in the revelation.

1 Then I stood on the sand of the sea. And I saw a beast rising up out of the sea, having seven heads and ten horns, and on his horns ten crowns, and on his heads a blasphemous name. 2 Now the beast which I saw was like a leopard, his feet were like the feet of a bear, and his mouth like the mouth of a lion. The dragon gave him his power, his throne, and great authority. 3 And I saw one of his heads as if it had been mortally wounded, and his deadly wound was healed. And all the world marveled and followed the beast. 4 So they worshiped the dragon who gave authority to the beast; and they worshiped the beast, saying, “Who is like the beast? Who is able to make war with him?”

This beast is a conglomeration of images, having seven heads and ten horns, and there is a blasphemous name on each head. This beast (monster) is a conglomeration of the political powers represented in Daniel’s vision of the kingdoms to follow his day: the bear, the leopard, the lion. This beast was given his power and authority by the dragon, and was, in some ways, a mirror image of him. The crowns were on the horns, representing political power, and not on the heads themselves. This beast wields great political and social power for evil. He mimics the wound of the Lamb, in a deep plot to appear messianic and to win over those living on the earth. The power of the beast was given by the dragon, as said earlier, and his ability to heal from and overcome the wound on his head brought him great influence and fame among those who chose to then worship him on earth.

5 And he was given a mouth speaking great things and blasphemies, and he was given authority to continue for forty-two months. 6 Then he opened his mouth in blasphemy against God, to blaspheme His name, His tabernacle, and those who dwell in heaven. 7 It was granted to him to make war with the saints and to overcome them. And authority was given him over every tribe, tongue, and nation. 8 All who dwell on the earth will worship him, whose names have not been written in the Book of Life of the Lamb slain from the foundation of the world.

The beast was given a mouth to speak blasphemies and bombastic ideas, and was allowed and authorized to do so for forty-two months (three and one-half years). He was given authority over all the earth, every tribe, tongue, and nation. He became the ruler of a one-world government, and he began to attack and overcome all the saints on the earth. These tribulation saints come under fire for the faith they exhibit in spite of the fact that they are one their own, without the help of the church and the express presence of the Holy Spirit. All the rest of the earth will worship the beast, seeing him as the savior of all humanity. Their names are not written in the Lamb’s book of life. The Lamb is the One slain from the foundation of the earth.

Just as Jesus called the churches in Revelation 2 & 3 to hear, the revelator also is called to hear and, by extension, all readers are called along with him. The Lord then offers this warning to the readers: if anyone follows Christ during this time and season, they challenge the power of the beast, and they will be hunted and killed. Therefore, they must be resolved to stand for Christ at the cost of their lives.