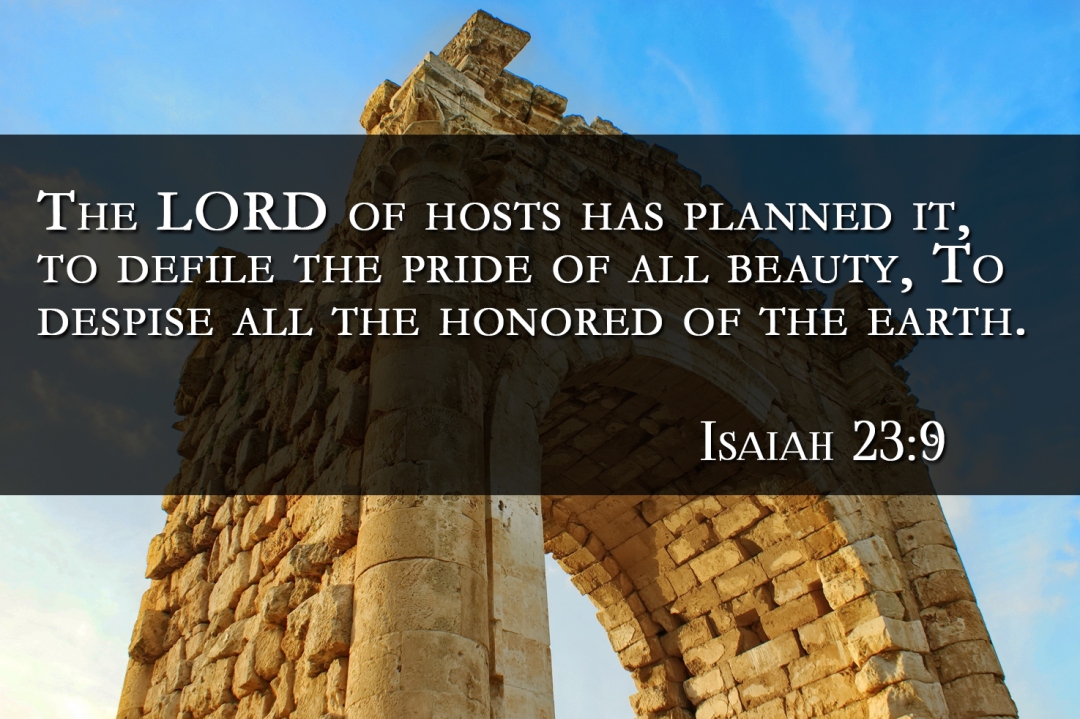 Wail, you ships of Tarshish!
For it is laid waste,
So that there is no house, no harbor;
From the land of Cyprus it is revealed to them.

2 Be still, you inhabitants of the coastland,
You merchants of Sidon,
Whom those who cross the sea have filled.
3 And on great waters the grain of Shihor,
The harvest of the River, is her revenue;
And she is a marketplace for the nations.

4 Be ashamed, O Sidon;
For the sea has spoken,
The strength of the sea, saying,
“I do not labor, nor bring forth children;
Neither do I rear young men,
Nor bring up virgins.”
5 When the report reaches Egypt,
They also will be in agony at the report of Tyre.

6 Cross over to Tarshish;
Wail, you inhabitants of the coastland!
7 Is this your joyous city,
Whose antiquity is from ancient days,
Whose feet carried her far off to dwell?
8 Who has taken this counsel against Tyre, the crowning city,
Whose merchants are princes,
Whose traders are the honorable of the earth?
9 The LORD of hosts has purposed it,
To bring to dishonor the pride of all glory,
To bring into contempt all the honorable of the earth.

10 Overflow through your land like the River,
O daughter of Tarshish;
There is no more strength.
11 He stretched out His hand over the sea,
He shook the kingdoms;
The LORD has given a commandment against Canaan
To destroy its strongholds.
12 And He said, “You will rejoice no more,
O you oppressed virgin daughter of Sidon.
Arise, cross over to Cyprus;
There also you will have no rest.”

13 Behold, the land of the Chaldeans,
This people which was not;
Assyria founded it for wild beasts of the desert.
They set up its towers,
They raised up its palaces,
And brought it to ruin.

14 Wail, you ships of Tarshish!
For your strength is laid waste.

15 Now it shall come to pass in that day that Tyre will be forgotten seventy years, according to the days of one king. At the end of seventy years it will happen to Tyre as in the song of the harlot:

16 “Take a harp, go about the city,
You forgotten harlot;
Make sweet melody, sing many songs,
That you may be remembered.”

17 And it shall be, at the end of seventy years, that the LORD will deal with Tyre. She will return to her hire, and commit fornication with all the kingdoms of the world on the face of the earth. 18 Her gain and her pay will be set apart for the LORD; it will not be treasured nor laid up, for her gain will be for those who dwell before the LORD, to eat sufficiently, and for fine clothing.

This passage clearly continues the judgment cries against the nations that opposed Israel and/or Judah.  Tyre is known as a sea country, with an armada of ships that fought against the people of God.  However, God reminds them that the sea does not bring forth children, nor bring them up to adulthood.  They cannot depend upon the sea, but must realize their only hope was and is God.  Their harlotry with the world system will lead to their downfall.

Do not fall prey to the mistakes of Tyre.  Do not adulterate yourself with the world system.  Do not depend on the nations to protect or provide for you.  Instead, depend upon the Lord for your provision and protection, and serve Him faithfully.  The fate of Tyre shall not fall on the people of God!