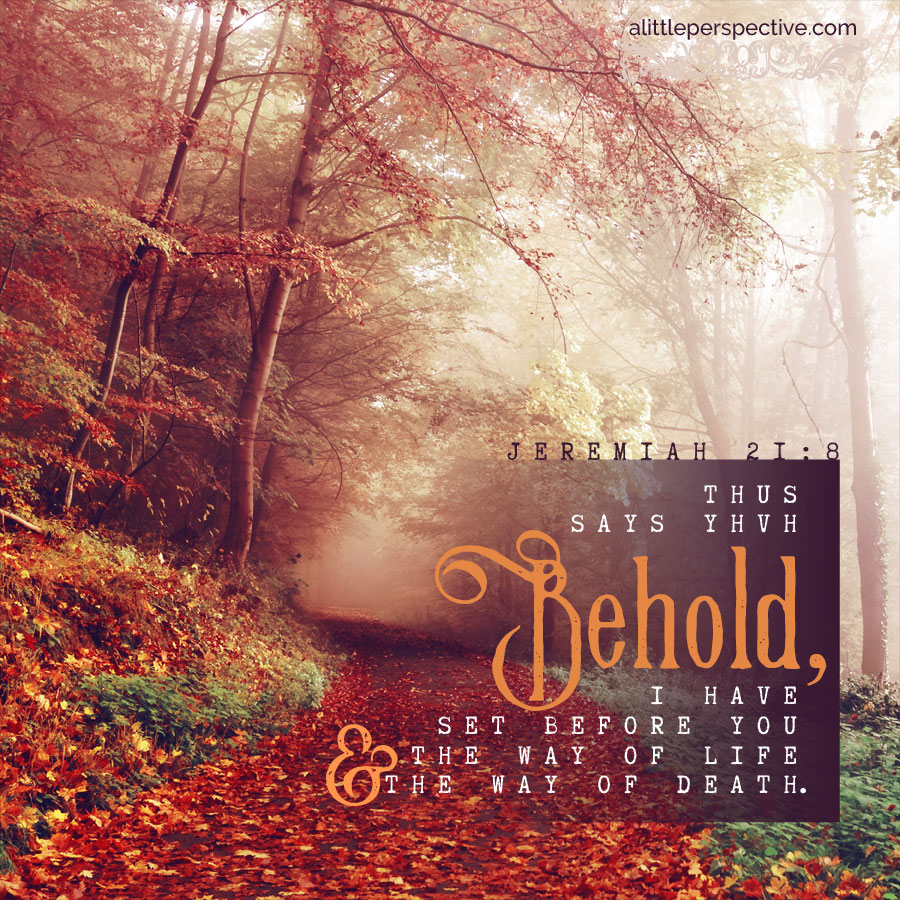 21:1 The word which came to Jeremiah from the Lord when King Zedekiah sent to him Pashhur the son of Melchiah, and Zephaniah the son of Maaseiah, the priest, saying, 2 “Please inquire of the Lord for us, for Nebuchadnezzar king of Babylon makes war against us. Perhaps the Lord will deal with us according to all His wonderful works, that the king may go away from us.”

3 Then Jeremiah said to them, “Thus you shall say to Zedekiah, 4 ‘Thus says the Lord God of Israel: “Behold, I will turn back the weapons of war that are in your hands, with which you fight against the king of Babylon and the Chaldeans who besiege you outside the walls; and I will assemble them in the midst of this city. 5 I Myself will fight against you with an outstretched hand and with a strong arm, even in anger and fury and great wrath. 6 I will strike the inhabitants of this city, both man and beast; they shall die of a great pestilence. 7 And afterward,” says the Lord, “I will deliver Zedekiah king of Judah, his servants and the people, and such as are left in this city from the pestilence and the sword and the famine, into the hand of Nebuchadnezzar king of Babylon, into the hand of their enemies, and into the hand of those who seek their life; and he shall strike them with the edge of the sword. He shall not spare them, or have pity or mercy.” ’

When Pashhur called for Jeremiah from his imprisonment, it was so King Zedekiah could get a positive prophecy concerning his defense of Judah from Babylon and Chaldea.  However, Jeremiah reveals the truth that God Himself will fight against Judah and they will be taken into captivity.

8 “Now you shall say to this people, ‘Thus says the Lord: “Behold, I set before you the way of life and the way of death. 9 He who remains in this city shall die by the sword, by famine, and by pestilence; but he who goes out and defects to the Chaldeans who besiege you, he shall live, and his life shall be as a prize to him. 10 For I have set My face against this city for adversity and not for good,” says the Lord. “It shall be given into the hand of the king of Babylon, and he shall burn it with fire.” ’

The Lord responds with instructions that will seal their fate.  He gives them the way of life and the way of death.  To live, they must go out and surrender to the Chaldeans, their enemies.  If they defend themselves and fight against the Chaldeans, remaining in the city, they will die.  Babylon will take Jerusalem and burn it with fire.  There is no changing the course of these events.  Judah is going into captivity, no doubt.

11 “And concerning the house of the king of Judah, say, ‘Hear the word of the Lord, 12 O house of David! Thus says the Lord:

“Execute judgment in the morning;

And deliver him who is plundered

Out of the hand of the oppressor,

And burn so that no one can quench it,

Because of the evil of your doings.

13 “Behold, I am against you, O inhabitant of the valley,

And rock of the plain,” says the Lord,

“Who say, ‘Who shall come down against us?

Or who shall enter our dwellings?’

14 But I will punish you according to the fruit of your doings,” says the Lord;

“I will kindle a fire in its forest,

And it shall devour all things around it.” ’ ”

This final passage poetically speaks of the impending judgment against Judah.  God gave them ample opportunities to turn back to Him and live obediently.  They continued to chase after idols and disobey God, which eventually leads to trouble.  When you walk opposite the will of God, His plan is forsaken, and His protection is misplaced.  Walk in unity and cooperation with God, so His plans, purpose, and prosperity are already there when you take every step.  Don’t walk in uncharted territory, for you will not know what comes next, and you will walk at a distance from the Lord, rather than by His side.  Follow the Leader!