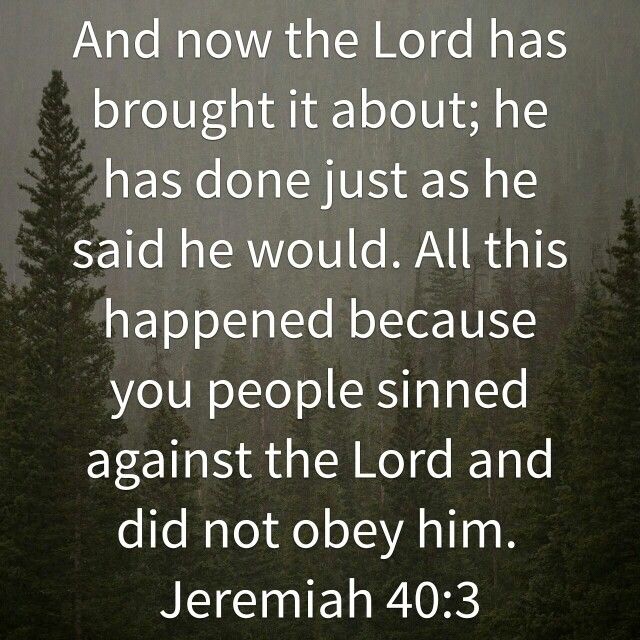 In the Midst Of Chaos

2 And the captain of the guard took Jeremiah and ﻿said to him: “The Lord your God has pronounced this doom on this place. 3 Now the Lord has brought it, and has done just as He said. ﻿Because you people have sinned against the Lord, and not obeyed His voice, therefore this thing has come upon you. 4 And now look, I free you this day from the chains that ﻿were on your hand. ﻿If it seems good to you to come with me to Babylon, come, and I will look after you. But if it seems wrong for you to come with me to Babylon, remain here. See, ﻿all the land is before you; wherever it seems good and convenient for you to go, go there.”

5 Now while Jeremiah had not yet gone back, Nebuzaradan said, “Go back to ﻿Gedaliah the son of Ahikam, the son of Shaphan, ﻿whom the king of Babylon has made governor over the cities of Judah, and dwell with him among the people. Or go wherever it seems convenient for you to go.” So the captain of the guard gave him rations and a gift and let him go. 6 ﻿Then Jeremiah went to Gedaliah the son of Ahikam, to ﻿Mizpah, and dwelt with him among the people who were left in the land.

After the conquest of Jerusalem, Jeremiah was being taken with the rest of the prisoners toward Babylon. While on their way out of town, Nebuzaradan, the captain of the guard, offered Jeremiah opportunity to decide whether to go to Babylon or stay in Judah. He suggested that he go and dwell with Gedaliah in Mizpah. When Jeremiah consented to that idea, the captain gave him an allowance and rations and set him free.

7 ﻿And when all the captains of the armies who were in the fields, they and their men, heard that the king of Babylon had made Gedaliah the son of Ahikam governor in the land, and had committed to him men, women, children, and ﻿the poorest of the land who had not been carried away captive to Babylon, 8 then they came to Gedaliah at Mizpah—﻿Ishmael the son of Nethaniah, ﻿Johanan and Jonathan the sons of Kareah, Seraiah the son of Tanhumeth, the sons of Ephai the Netophathite, and ﻿Jezaniah ﻿the son of a ﻿Maachathite, they and their men. 9 And Gedaliah the son of Ahikam, the son of Shaphan, took an oath before them and their men, saying, “Do not be afraid to serve the Chaldeans. Dwell in the land and serve the king of Babylon, and it shall be ﻿well with you. 10 As for me, I will indeed dwell at Mizpah and serve the Chaldeans who come to us. But you, gather wine and summer fruit and oil, put them in your vessels, and dwell in your cities that you have taken.” 11 Likewise, when all the Jews who were in Moab, among the Ammonites, in Edom, and who were in all the countries, heard that the king of Babylon had left a remnant of Judah, and that he had set over them Gedaliah the son of Ahikam, the son of Shaphan, 12 then all the Jews ﻿returned out of all places where they had been driven, and came to the land of Judah, to Gedaliah at Mizpah, and gathered wine and summer fruit in abundance.

The remnant of the Jews were attempting to figure out their next steps. Gedaliah told them not to fear their enemy, but to serve them, just as Jeremiah had instructed them prophetically before the conquest. Those who had been driven out and had fled to Edam, Ammon, and Moab returned to Gedaliah, and they inhabited the promised land.

13 Moreover Johanan the son of Kareah and all the captains of the forces that were in the fields came to Gedaliah at Mizpah, 14 and said to him, ﻿“Do you certainly know that ﻿Baalis the king of the Ammonites has sent Ishmael the son of Nethaniah to murder you?” But Gedaliah the son of Ahikam did not believe them.

15 Then Johanan the son of Kareah spoke secretly to Gedaliah in Mizpah, saying, “Let me go, please, and I will kill Ishmael the son of Nethaniah, and no one will know it. Why should he murder you, so that all the Jews who are gathered to you would be scattered, and the ﻿remnant in Judah perish?”

16 But Gedaliah the son of Ahikam said to Johanan the son of Kareah, “You shall not do this thing, for you speak falsely concerning Ishmael.”

Finally, Johanan came to Gedaliah with a warning that the king of the Ammonites had sent a man to kill Gedaliah. Johanan offered to kill him, but Gedaliah did not believe his story and rejected the offer.

The inhabitants of Judah faced a horrible situation, having been killed and plundered by Babylon. Their people had been taken away to that foreign land and forced into captivity, and only the few, mostly poor, were left in Judah. Even though they had a tough, tough, situation, they had hope. Where did this hope come from? From the word of God. He promised to restore Judah and Jerusalem. He promised to bring back the captives. They had obeyed God’s instructions given through Jeremiah, and now they could faithfully wait for the fulfillment of His promises. When you are in a tough place, remember Jeremiah, remember Gedaliah, and remember their faith in the midst of chaos.