16 Now it came to pass at the end of seven days that the word of the Lord came to me, saying, 17 “Son of man, I have made you a watchman for the house of Israel; therefore hear a word from My mouth, and give them warning from Me: 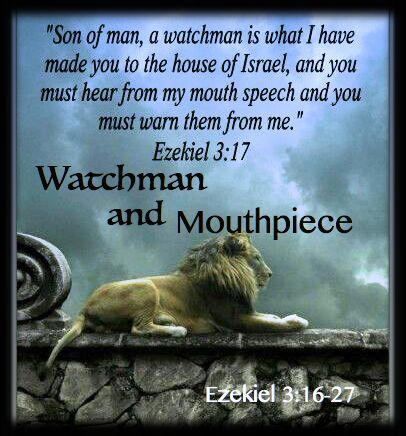 20 “Again, when a righteous man turns from his righteousness and commits iniquity, and I lay a stumbling block before him, he shall die; because you did not give him warning, he shall die in his sin, and his righteousness which he has done shall not be remembered; but his blood I will require at your hand. 21 Nevertheless if you warn the righteous man that the righteous should not sin, and he does not sin, he shall surely live because he took warning; also you will have delivered your soul.”

22 Then the hand of the Lord was upon me there, and He said to me, “Arise, go out into the plain, and there I shall talk with you.”

23 So I arose and went out into the plain, and behold, the glory of the Lord stood there, like the glory which I saw by the River Chebar; and I fell on my face. 24 Then the Spirit entered me and set me on my feet, and spoke with me and said to me: “Go, shut yourself inside your house. 25 And you, O son of man, surely they will put ropes on you and bind you with them, so that you cannot go out among them. 26 I will make your tongue cling to the roof of your mouth, so that you shall be mute and not be one to rebuke them, for they are a rebellious house. 27 But when I speak with you, I will open your mouth, and you shall say to them, ‘Thus says the Lord God.’ He who hears, let him hear; and he who refuses, let him refuse; for they are a rebellious house.

After the week Ezekiel spent recovering from the awesome vision of God’s throne and the living creatures, Ezekiel is addressed again by the Lord to anoint him as the watchman over Israel.  Israel has trangressed the law of God and gone into captivity, rebellious against the Lord in so many ways.  However, God drops a responsibility on Ezekiel to warn them.  If he does not fulfill this duty, he will be partly responsible for the destruction of the sinners.  If he fulfills this duty, then the sinner must suffer the consequences of his continued rebellion on his own, and Ezekiel is not guilty.  Even though Ezekiel is told that he will suffer imprisonment and isolation, he is still to speak when the opportunity arises.

Today in the United States, we are not in the violent or rebellious environment in which Ezekiel ministered.  We have freedom and a general sense of acceptance.  While the gospel is not accepted or allowed in many nations, this is not the case here.  Things may change, but for now people are amenable to the preaching of the gospel.  Our reluctance here today is not in the form of violence or imprisonment, but just simply rejection and unacceptance.  Even that form of rejection is disheartening, but we must persevere, for there may be souls who hang in the balance, facing sure destruction, that we must warn and to whom we must give hope.  We are the watchman, and the enemy is lurking near.  Tell the wonderful news of God’s grace through Jesus Christ, and save souls.  I do not want blood on my hands!  I will be…the Watchman.