21 “But if a wicked man turns from all his sins which he has committed, keeps all My statutes, and does what is lawful and right, he shall surely live; he shall not die. 22 None of the transgressions which he has committed shall be remembered against him; because of the righteousness which he has done, he shall live. 23 Do I have any pleasure at all that the wicked should die?” says the Lord God, “and not that he should turn from his ways and live?

In this passage, the Lord establishes the principle of personal responsibility.  While the sinfulness of a nation or family has an effect on those in those social systems, it is still the responsibility of the individual to find their own way to a place of righteousness.  Additionally, the principal of finishing what you start is true as well.  Finishing well is essential to eternal salvation.  Don’t start and quit.  Don’t begin well and end poorly.  If you begin well and fail to finish, you lose.  But if you begin horribly and then repent and follow Christ, you are redeemed and free of your guilt and shame.  Finish well!

30 “Therefore I will judge you, O house of Israel, every one according to his ways,” says the Lord God. “Repent, and turn from all your transgressions, so that iniquity will not be your ruin. 31 Cast away from you all the transgressions which you have committed, and get yourselves a new heart and a new spirit. For why should you die, O house of Israel? 32 For I have no pleasure in the death of one who dies,” says the Lord God. “Therefore turn and live!”

The definition of repentence is turning.  A 180 degree change.  Eschewing evil and sin and aspiring to righteousness and holiness.  Changing your destination from hell to heaven.  Changing your allegiance from Satan and his minions to God and His holy angels.  Hating sin and loving God.  God is not unfair in requiring holiness all your days.  His standard is right!  However, in our setting in 2018, we have the glorious privilege to take on the holiness of God through the sacrifice and blood of Jesus Christ.  While the Israelites were called upon to perform and offer sacrifices, we are called to commit to holiness and appropriate the sacrifice of Jesus Christ.  The only way to holiness is through Jesus Christ.  Therefore, turn and live! 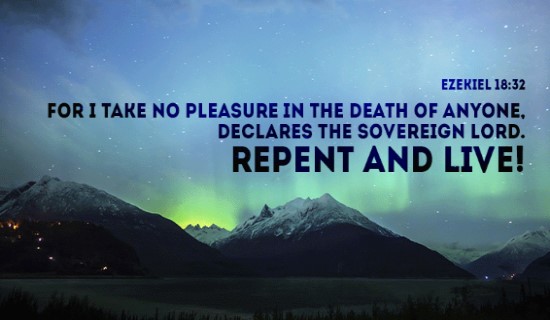