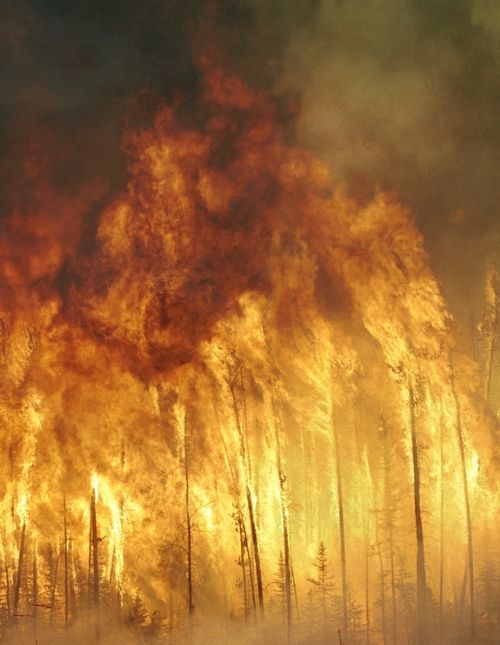 The Lord further declares judgment against Pharaoh by speaking of his one arm being broken and him groaning before the king of Babylon.  The Egyptians will be scattered by the sword to the neighboring nations.

31:1 Now it came to pass in the eleventh year, in the third month, on the first day of the month, that the word of the Lord came to me, saying, 2 “Son of man, say to Pharaoh king of Egypt and to his multitude:

3 Indeed Assyria was a cedar in Lebanon,

With fine branches that shaded the forest,

And of high stature;

And its top was among the thick boughs.

4 The waters made it grow;

With their rivers running around the place where it was planted,

And sent out rivulets to all the trees of the field.

5 ‘Therefore its height was exalted above all the trees of the field;

Its boughs were multiplied,

And its branches became long because of the abundance of water,

As it sent them out.

6 All the birds of the heavens made their nests in its boughs;

Under its branches all the beasts of the field brought forth their young;

And in its shadow all great nations made their home.

7 ‘Thus it was beautiful in greatness and in the length of its branches,

Because its roots reached to abundant waters.

8 The cedars in the garden of God could not hide it;

And the chestnut trees were not like its branches;

No tree in the garden of God was like it in beauty.

9 I made it beautiful with a multitude of branches,

So that all the trees of Eden envied it,

That were in the garden of God.’

10 “Therefore thus says the Lord God: ‘Because you have increased in height, and it set its top among the thick boughs, and its heart was lifted up in its height, 11 therefore I will deliver it into the hand of the mighty one of the nations, and he shall surely deal with it; I have driven it out for its wickedness. 12 And aliens, the most terrible of the nations, have cut it down and left it; its branches have fallen on the mountains and in all the valleys; its boughs lie broken by all the rivers of the land; and all the peoples of the earth have gone from under its shadow and left it.

13 ‘On its ruin will remain all the birds of the heavens,

14 ‘So that no trees by the waters may ever again exalt themselves for their height, nor set their tops among the thick boughs, that no tree which drinks water may ever be high enough to reach up to them.

‘For they have all been delivered to death,

To the depths of the earth,

Among the children of men who go down to the Pit.’

The Lord uses another analogy to describe the fall of Egypt, comparing her to Assyria, who grew to become a mighty cedar in which birds made their nests and under whom animals birthed their young.  However, just like Assyria, they will be cut down and no nation shall exalt itself to the place of prominence again.

15 “Thus says the Lord God: ‘In the day when it went down to hell, I caused mourning. I covered the deep because of it. I restrained its rivers, and the great waters were held back. I caused Lebanon to mourn for it, and all the trees of the field wilted because of it. 16 I made the nations shake at the sound of its fall, when I cast it down to hell together with those who descend into the Pit; and all the trees of Eden, the choice and best of Lebanon, all that drink water, were comforted in the depths of the earth. 17 They also went down to hell with it, with those slain by the sword; and those who were its strong arm dwelt in its shadows among the nations.

18 ‘To which of the trees in Eden will you then be likened in glory and greatness? Yet you shall be brought down with the trees of Eden to the depths of the earth; you shall lie in the midst of the uncircumcised, with those slain by the sword. This is Pharaoh and all his multitude,’ says the Lord God.”

One final judgment statement says that the tree will be brought down and cast into hell, and all the nations that followed it will go down into hell as well.  This judgment is severe, and complete.  Egypt will be removed from the status of a nation that is greater than others, and will be judged harshly.  This judgment will great a chasm in the political order, making Babylon the greatest of all nations under Nebuchadnezzer.  While Egypt and Israel languish among the nations, Babylon will flourish…until God judges them at a later time.  Don’t think that sinful men or women will escape the judgment of God.  Even if you get by with sin for a time, God’s judgment, or the recompense of your actions, will catch up with you.  Don’t think God forgot!