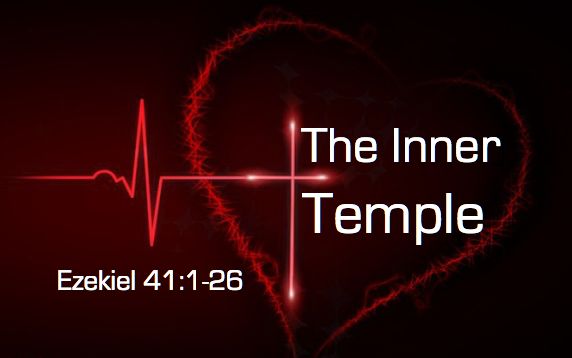 41:1 Then he brought me into the sanctuary and measured the doorposts, six cubits wide on one side and six cubits wide on the other side—the width of the tabernacle. 2 The width of the entryway was ten cubits, and the side walls of the entrance were five cubits on this side and five cubits on the other side; and he measured its length, forty cubits, and its width, twenty cubits.

The Angelic Guide takes Ezekiel into the temple in this vision, and shows him the dimensions of the inside areas, eventually showing him the Most Holy Place, but not allowing him to enter it.  A cubit, by the way, is between 18 and 20 inches.

12 The building that faced the separating courtyard at its western end was seventy cubits wide; the wall of the building was five cubits thick all around, and its length ninety cubits.

The pictures at the bottom of this blog illustrate the measurements given to Ezekiel by the guide.  The temple, basically, was set on a 10 foot base, and had multiple rooms on either side, with three major sections inside: the porch, the nave, and the holy of holies.  This description talks about the annexes which housed supplies and was used for housing for Levites and priests.  The open area between the annexes and the temple proper made the temple an island inside the complex.

The inner rooms of the temple were ornate, with carvings of palm trees and cherubim on each wall.  See the pictures at the bottom of the blog for a rendering of what they may have looked like.

21 The doorposts of the temple were square, as was the front of the sanctuary; their appearance was similar. 22 The altar was of wood, three cubits high, and its length two cubits. Its corners, its length, and its sides were of wood; and he said to me, “This is the table that is before the Lord.”

23 The temple and the sanctuary had two doors. 24 The doors had two panels apiece, two folding panels: two panels for one door and two panels for the other door. 25 Cherubim and palm trees were carved on the doors of the temple just as they were carved on the walls. A wooden canopy was on the front of the vestibule outside. 26 There were beveled window frames and palm trees on one side and on the other, on the sides of the vestibule—also on the side chambers of the temple and on the canopies.

The windows were covered, and the doors were also carved with cherubim and palm trees.  “The table that is before the Lord” was at the front of the sanctuary, signifying the sacrificial nature of worship in the restored Jerusalem temple.

What can all this mean for us today?  Let us prepare a temple for the Lord worthy of His name.  I do not necessarily mean a physical temple with gold and wood carved with images, but rather prepare your heart to worship Him.  Prepare yourself in holiness.  Prepare yourself in purity.  Prepare your inner temple to meet the specifications of the angelic guide.  Worship Him as He demands, rather than offering Him leftovers and irregulars, seconds and inferior offerings.  Give God the best you have and you will experience His best as well! 2 thoughts on “The Inner Temple”