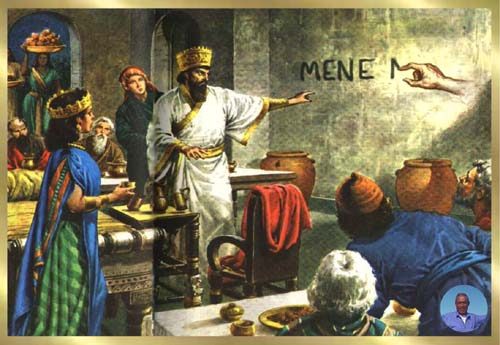 A new king has taken power in Babylon, the son of Nebuchadnezzer, named Belshazzar.  He mocked the God of Israel by calling for the holy vessels from the temple of the Lord to be brought in during a feast.  His guests and he treated them as common, drinking from them like any other vessels.  Then they toasted the false gods of the land.

5 In the same hour the fingers of a man’s hand appeared and wrote opposite the lampstand on the plaster of the wall of the king’s palace; and the king saw the part of the hand that wrote. 6 Then the king’s countenance changed, and his thoughts troubled him, so that the joints of his hips were loosened and his knees knocked against each other. 7 The king cried aloud to bring in the astrologers, the Chaldeans, and the soothsayers. The king spoke, saying to the wise men of Babylon, “Whoever reads this writing, and tells me its interpretation, shall be clothed with purple and have a chain of gold around his neck; and he shall be the third ruler in the kingdom.” 8 Now all the king’s wise men came, but they could not read the writing, or make known to the king its interpretation. 9 Then King Belshazzar was greatly troubled, his countenance was changed, and his lords were astonished.

After they defamed God by drinking from His holy vessels, a hand appeared and wrote on the wall opposite the light in the hall.  The sight shook the king, and he called for his wise men to interpret what was written.  None of them could, and the king’s countenance changed.

10 The queen, because of the words of the king and his lords, came to the banquet hall. The queen spoke, saying, “O king, live forever! Do not let your thoughts trouble you, nor let your countenance change. 11 There is a man in your kingdom in whom is the Spirit of the Holy God. And in the days of your father, light and understanding and wisdom, like the wisdom of the gods, were found in him; and King Nebuchadnezzar your father—your father the king—made him chief of the magicians, astrologers, Chaldeans, and soothsayers. 12 Inasmuch as an excellent spirit, knowledge, understanding, interpreting dreams, solving riddles, and explaining enigmas were found in this Daniel, whom the king named Belteshazzar, now let Daniel be called, and he will give the interpretation.”

When the queen heard the commotion, she ran immediately to the banquet hall.  When she heard what had happened, she reminded Belshazzar about Daniel, and his skill at interpreting his father’s dreams. She described him as having an excellent spirit, the Spirit of the Holy God.  She assured him that Daniel would give Him the interpretation.  Each Christian should live in such a way that their reputation precedes them, and people call on them in times of trouble.  Do people know your reputation in the Lord?