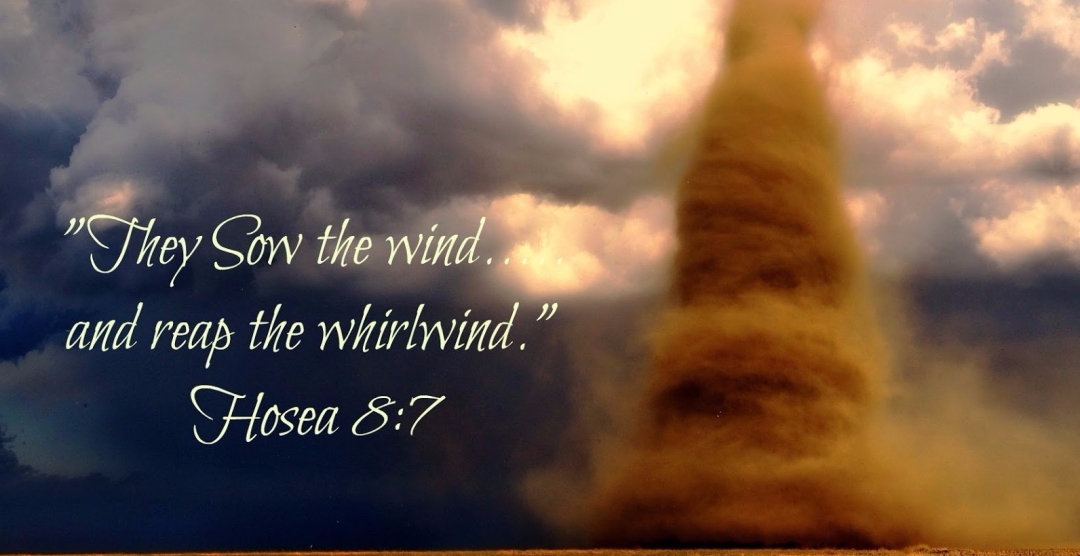 And reap the whirlwind.

The stalk has no bud;

It shall never produce meal.

If it should produce,

Aliens would swallow it up.

8 Israel is swallowed up;

Now they are among the Gentiles

9 For they have gone up to Assyria,

10 Yes, though they have hired among the nations,

Now I will gather them;

And they shall sorrow a little,

Because of the burden of the king of princes.

11 “Because Ephraim has made many altars for sin,

They have become for him altars for sinning.

12 I have written for him the great things of My law,

But they were considered a strange thing.

13For the sacrifices of My offerings they sacrifice flesh and eat it,

But the Lord does not accept them.

Now He will remember their iniquity and punish their sins.

They shall return to Egypt.

14 “For Israel has forgotten his Maker,

And has built temples;

But I will send fire upon his cities,

And it shall devour his palaces.”

The indictment of Israel continues in this passage, pointing out the sins of political arrogance and idolatry in the first part of the chapter, and continuing with additional sins in this passage.  One scholar summarizes below.

The passage portrays vividly the nearness of destruction. From the image of the lion and eagle (v 1) to the image of fire raging through the country’s cities and forts, the imminence of war overshadows the North. Against this, Israel’s trust is foolishly misplaced. Their hope in their defensive preparations (v 14), their intense religious ritual (v 13) and their various allies (vv 9–10) cannot be rewarded. The enemy will devour and consume them.*

Basically, Israel has turned its back on God in almost every way, and the punishments listed here are on their way in order to discipline Israel and bring them back to God.  What will it take for us to come back to God?  Hopefully, not fire in our cities, or military attacks from heathen nations.  Hopefully, our trust is in God alone, and our worship is purely His.  If so, we will prosper and live.  If not, we may face destruction.  There has been fire in our streets in the forms of extremist attacks and riots.  We are politically motivated in a stronger way than ever before.  Let us pray and seek God for direction before judgment falls!  Don’t Reap the Whirlwind!