2 As they called them, So they went from them; They sacrificed to the Baals, And burned incense to carved images.

3 “I taught Ephraim to walk, Taking them by their arms; But they did not know that I healed them.

4 I drew them with gentle cords, With bands of love, And I was to them as those who take the yoke from their neck.  I stooped and fed them. 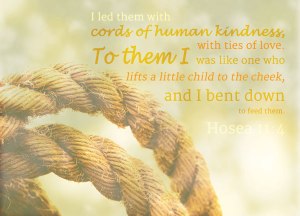 5 “He shall not return to the land of Egypt; But the Assyrian shall be his king, Because they refused to repent.

6 And the sword shall slash in his cities, Devour his districts, And consume them, Because of their own counsels.

7 My people are bent on backsliding from Me.  Though they call to the Most High, None at all exalt Him.

This chapter begins with a rebuke of Israel.  The Lord describes how He has found and called Israel from nothing; loving them, calling them, teaching them, and drawing them.  Because of their rebellion, they will be oppressed and slashed by foreign armies, and in captivity to Assyria.  They will call to God, but not for exaltation, only for help.  They are a backsliding people.

8 “How can I give you up, Ephraim?  How can I hand you over, Israel?  How can I make you like Admah?  How can I set you like Zeboiim?  My heart churns within Me; My sympathy is stirred.

9 I will not execute the fierceness of My anger; I will not again destroy Ephraim. For I am God, and not man, The Holy One in your midst; And I will not come with terror. 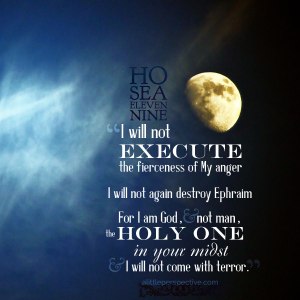 10 “They shall walk after the Lord.  He will roar like a lion.  When He roars, Then His sons shall come trembling from the west;

11 They shall come trembling like a bird from Egypt, Like a dove from the land of Assyria.  And I will let them dwell in their houses,” Says the Lord.

In this section, however, the Lord speaks in anguish over the need to punish Israel, expressing sympathy for His children.  He states that He will not punish them fiercely or utterly destroy them.  He will hold back His terror and they will walk after Him again like children, and He will roar like a lion and they will return to Him.  Then He will restore them to their houses and land.

This picture of a righteous judge chastening His children is fearful, but the picture of grace in restoring them is precious.  While God does hate sin, and judgment comes as a consequence of sin, God is merciful, and will restore if men repent.  If you have been caught in sin, repent and be restored.  God loves you even when you sin, but He cannot ignore sin.  But when the discipines and chastening come, turn and be restored!