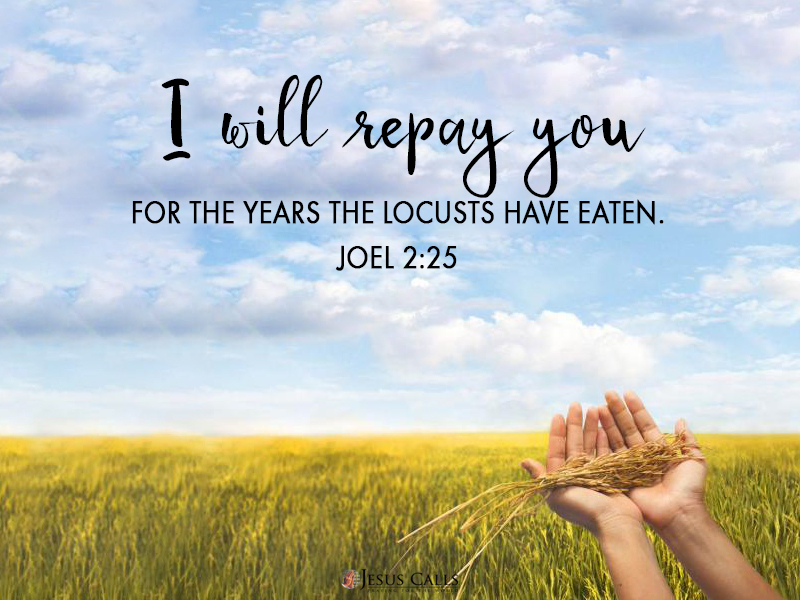 18 Then the Lord will be zealous for His land, And pity His people.

19 The Lord will answer and say to His people, “Behold, I will send you grain and new wine and oil, And you will be satisfied by them; I will no longer make you a reproach among the nations.

20 “But I will remove far from you the northern army, And will drive him away into a barren and desolate land, With his face toward the eastern sea And his back toward the western sea; His stench will come up, And his foul odor will rise, Because he has done monstrous things.”

21 Fear not, O land; Be glad and rejoice, For the Lord has done marvelous things!

22 Do not be afraid, you beasts of the field; For the open pastures are springing up, And the tree bears its fruit; The fig tree and the vine yield their strength.

The Lord tells Israel that they will be safe, and that their fears are unnecessary.  All that is lost will be restored, and even the animals are to see their needs met.

23 Be glad then, you children of Zion, And rejoice in the Lord your God; For He has given you the former rain faithfully, And He will cause the rain to come down for you—The former rain, And the latter rain in the first month.

24 The threshing floors shall be full of wheat, And the vats shall overflow with new wine and oil.

25 “So I will restore to you the years that the swarming locust has eaten, The crawling locust, The consuming locust, And the chewing locust, My great army which I sent among you.

26 You shall eat in plenty and be satisfied, And praise the name of the Lord your God, Who has dealt wondrously with you; And My people shall never be put to shame.

27 Then you shall know that I am in the midst of Israel: I am the Lord your God And there is no other.  My people shall never be put to shame.

The Lord then goes beyond Israel’s relief from fear, and then tells them that they will begin to rejoice over the blessings of the Lord.  He reminds them of the former rain, which came in times past, but also promises them the latter rain.  They will have much wheat, wine, and oil.  He will also restore all that the locusts (enemies) have taken away.  There shall be plenty to eat, and great satisfaction.  His relationship with Israel will be restored, and they will be given back the fame and respect they once enjoyed.

While there is an eschatological tone to the prophecy of the latter rain, it also had a specific application to their day as well.  Their world was changing.  They would be ravaged by their enemies, but God would restore them.  In the same way, God poured out His Spirit in former times, but would also pour out His Spirit in the latter days on the day of Pentecost.  This is a powerful message of hope for Israel in the day of restoration, and also for the world in the day of Christ.  Repent, be restored, and wait for the latter rain!