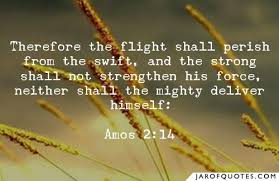 6 Thus says the Lord:  “For three transgressions of Israel, and for four, I will not turn away its punishment, because they sell the righteous for silver, and the poor for a pair of sandals.

7 They pant after the dust of the earth which is on the head of the poor, and pervert the way of the humble.  A man and his father go in to the same girl, to defile My holy name.

8 They lie down by every altar on clothes taken in pledge, and drink the wine of the condemned in the house of their god.

The Lord opens this judgment of Israel with a list of their crimes.  His own people receive some of the longest and most thorough rebukes.  They engage in slavery, oppression, adultery, extortion, and drunkenness.  Their sins have caught up with them, and the condemnation is present.

9 “Yet it was I who destroyed the Amorite before them, whose height was like the height of the cedars, and he was as strong as the oaks; Yet I destroyed his fruit above and his roots beneath.

10 Also it was I who brought you up from the land of Egypt, and led you forty years through the wilderness, to possess the land of the Amorite.

The Lord points out how He has delivered Israel in many occasions from her enemies.  He has delivered them from the Amorites and from Egypt, representative of the many times He gave them military victory and deliverance from bondage.

11 I raised up some of your sons as prophets, and some of your young men as Nazirites.  Is it not so, O you children of Israel?” says the Lord.

12 “But you gave the Nazirites wine to drink, and commanded the prophets saying, ‘Do not prophesy!’

The Lord called the young of Israel to prophecy and minister in His name, yet the ungodly in the nation have quenched that ministry, not wanting to hear from God through their children.

14 Therefore flight shall perish from the swift, the strong shall not strengthen his power, nor shall the mighty deliver himself;

15 He shall not stand who handles the bow, the swift of foot shall not escape, nor shall he who rides a horse deliver himself.

16 The most courageous men of might shall flee naked in that day,” says the Lord.

God’s fulfillment of His plan for Israel is bogged down by their sin.  Therefore, they will be slowed down, weak, unsure in battle, overcome by enemies, and scared of their adversaries.  He even describes them as having been stripped naked in shame.  When God’s people ignore Him and sin, judgment comes.  Don’t foolishly deny the Lordship of Christ.  He is Lord and will be served.  Don’t end up on the wrong end of God’s wrath like Israel.  Their turn was severe!