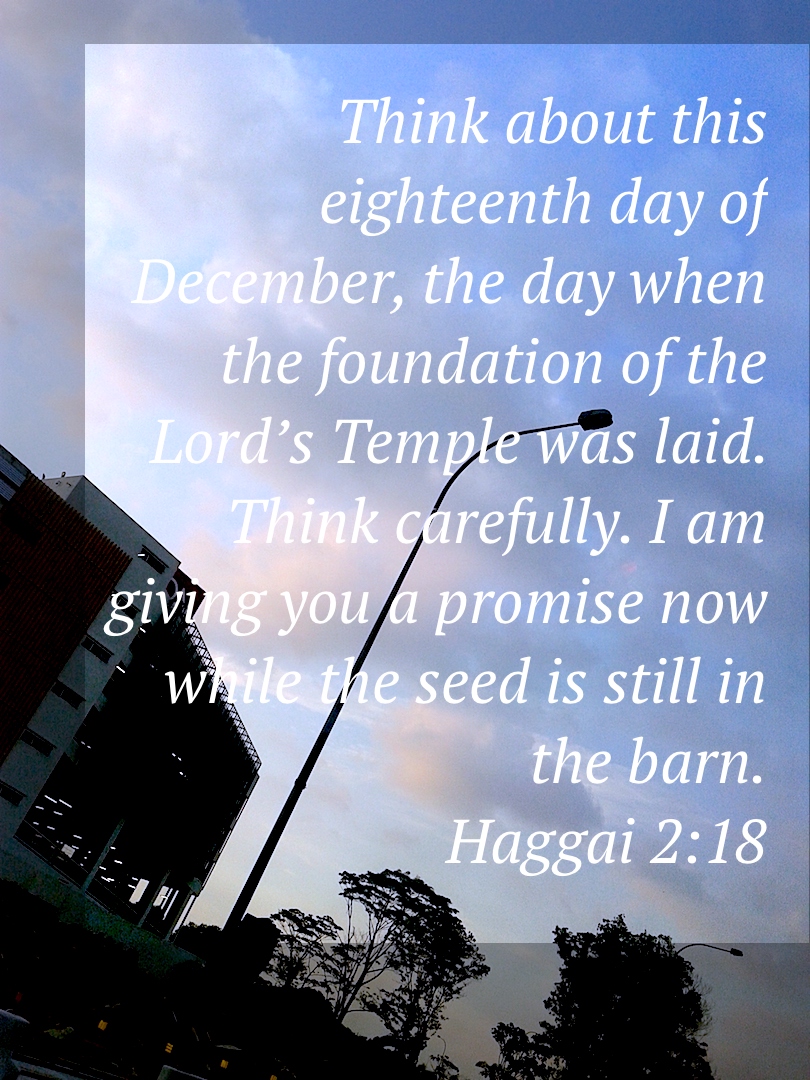 15 ‘And now, carefully consider from this day forward: from before stone was laid upon stone in the temple of the Lord—16 since those days, when one came to a heap of twenty ephahs, there were but ten; when one came to the wine vat to draw out fifty baths from the press, there were but twenty. 17 I struck you with blight and mildew and hail in all the labors of your hands; yet you did not turn to Me,’ says the Lord. 18 ‘Consider now from this day forward, from the twenty-fourth day of the ninth month, from the day that the foundation of the Lord’s temple was laid—consider it: 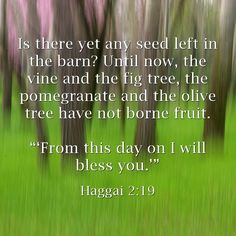 19 Is the seed still in the barn? As yet the vine, the fig tree, the pomegranate, and the olive tree have not yielded fruit. But from this day I will bless you.’ ”

The Lord once again reminds the people of God how their sin affects their condition.  They were receiving much less than they needed because of their sin.  The Lord is ready to rebuild His temple, and the foundation is being laid, but do not forget the lack and need of the days of sin.  The seed is still in the barn, and the trees and fields have not yielded their fruit.  But God promises, “But from this day I will bless you.”

20 And again the word of the Lord came to Haggai on the twenty-fourth day of the month, saying, 21 “Speak to Zerubbabel, governor of Judah, saying:

‘I will shake heaven and earth.

22 I will overthrow the throne of kingdoms;

I will destroy the strength of the Gentile kingdoms.

I will overthrow the chariots

And those who ride in them;

The horses and their riders shall come down,

Every one by the sword of his brother.

God then speaks directly to the governor of Judah, Zerubbabel, calling Him to be the ruler of God in the nation.  He declares His authority over all the surrounding nations, and thens names Zerubbabel as His signet ring, His sign of authority.

This passage speaks to God’s priority, His promise, and His presence.  God uses the image of the foundation of the temple to demonstrate His priority among all things.  We must build our lives on the foundation of the Lord, His word, and His Spirit (v. 18).  He gives His people the promise of restoration and fruit in their lives (v. 19).  He then offers His presence and authority to His people (v. 23).  Live with God as your foundation, your motivation, and your power to finish what He has begun in your life.  Live a life of conviction and confidence in God’s priority, promise, and presence.