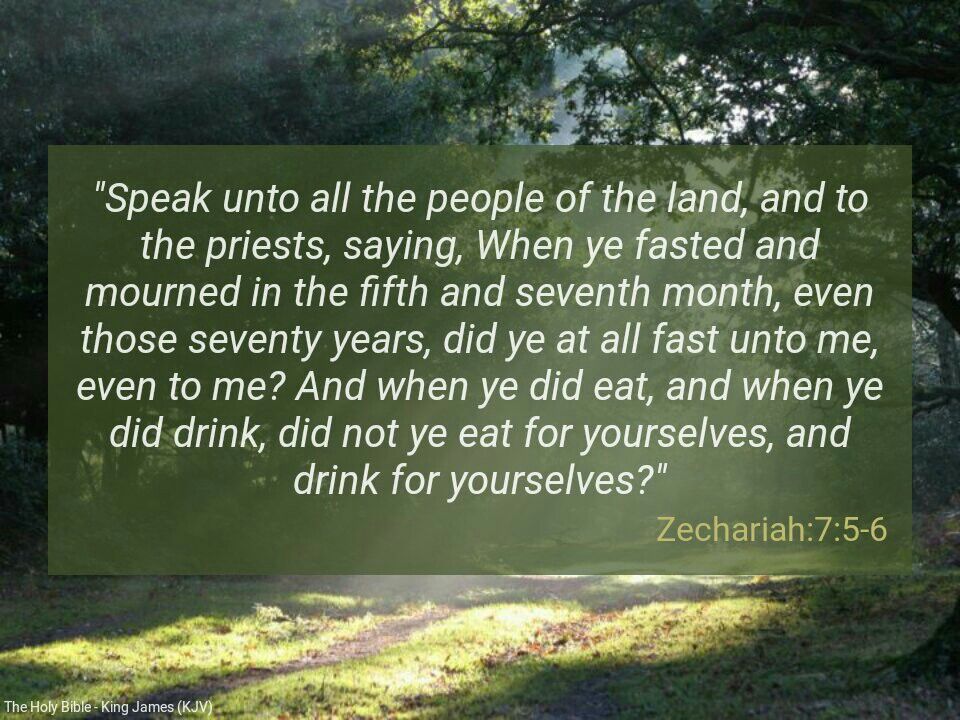 7:1 Now in the fourth year of King Darius it came to pass that the word of the Lord came to Zechariah, on the fourth day of the ninth month, Chislev, 2 when the people sent Sherezer, with Regem-Melech and his men, to the house of God, to pray before the Lord, 3 and to ask the priests who were in the house of the Lord of hosts, and the prophets, saying, “Should I weep in the fifth month and fast as I have done for so many years?”

4 Then the word of the Lord of hosts came to me, saying, 5 “Say to all the people of the land, and to the priests: ‘When you fasted and mourned in the fifth and seventh months during those seventy years, did you really fast for Me—for Me? 6 When you eat and when you drink, do you not eat and drink for yourselves? 7 Should you not have obeyed the words which the Lord proclaimed through the former prophets when Jerusalem and the cities around it were inhabited and prosperous, and the South and the Lowland were inhabited?’ ”

The prophet Zechariah poses a question to the Lord in the midst of this book.  He asks if he should fast in the fifth month as he normally would.  The Lord responds with a powerful response that reframes the whole aspect of fasting.  He asks what the motivation for fasting really was.  Did they fast for Him, really?  When they ate, did they not eat for themselves?  Then He tells Zechariah that they should have actually obeyed God’s laws and commands that came through the prophets of old.  They should have obeyed when they prospered and dwelt in the promised land.  Instead, they disobeyed, and fasting or feasting became ritualistic and task-oriented, ceremonial at best.

The Lord is telling Zechariah to return and to tell God’s people to return to obedience, for that is where the real blessing comes.  Fasting is fitting, and it can be effective in bringing one back to a place of obedience and intimacy with God, but fasting alone is not efficacious.  Fasting is a tool to obedience, not a magic pill.  Fast for the right reasons, and–whatever you do–strive to obey God!