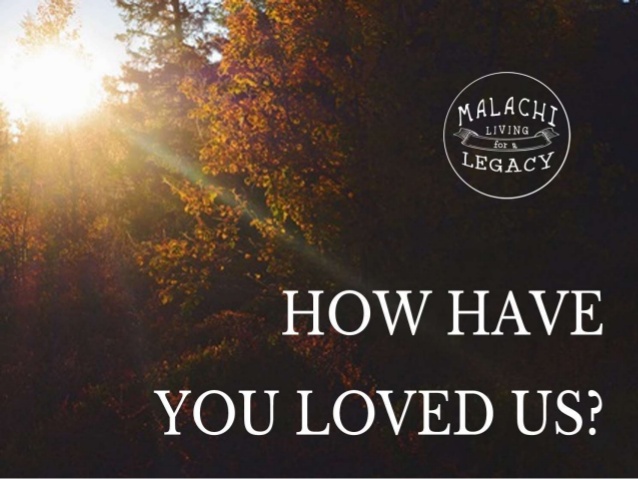 I Have Loved You

1 The burden of the word of the Lord to Israel by Malachi.

Was not Esau Jacob’s brother?”

“Yet Jacob I have loved;

3 But Esau I have hated,

And laid waste his mountains and his heritage

For the jackals of the wilderness.”

4 Even though Edom has said,

“We have been impoverished,

But we will return and build the desolate places,”

Thus says the Lord of hosts:

“They may build, but I will throw down;

They shall be called the Territory of Wickedness,

And the people against whom the Lord will have indignation forever.

5 Your eyes shall see,

And you shall say,

‘The Lord is magnified beyond the border of Israel.’

Malachi opens this prophetic word with a confirmation of the love of God for Israel.  Since the Northern Kingdom, called Israel, has been dispersed and no longer officially exists, this could be a reference to the remaining kingdom, Judah, who chose to take on this more noble name of their ancestor Jacob.  Either way, the Lord gives Malachi this word that hearkens back to the rift between Jacob and Esau, twin brothers who had strife between them.  Even though they reconciled upon Jacob’s return from the wilderness, there remained enmity and strife between their descendants for generations.  Jacob had tricked Esau on many occasions, and the tension remained.  Part of this came from the fact that God chose Jacob, not Esau.  This election of Jacob as the father of God’s chosen people led to contention and resentment for hundreds of years.  Now, God re-establishes His covenant with, His choosing of Jacob.

This argument is in the form of a disputation, or debate, similar to the Socratic method of debate, with an argument, a rebuttal, and a further explanation of the argument that seems to settle the debate.  In each case, the recipient of the message asks, “In what way have…,”  and the Lord responds with His explanation.  In this case, Malachi states that God loves Israel.  The recipient asks “In what way have You loved us?”  The Lord responds that He loves Jacob and not Esau (Edom).  An unnamed, perhaps hypothetical, debater says that Edom will fight for land and status again.  The Lord further states that Edom’s efforts will come to nothing, and their buildings will be torn down, because He loves Jacob (Israel).

God loves those whom He chooses.  As the New Testament says, God chooses those He foreknows will choose Him.  Therefore, choose to know God.  Join the ranks of the chosen, for in this is the true blessing of the covenant of grace.  The sinful, unrighteous man or woman can be brought into covenant relationship with Almighty God if we simply sincerely respond to His call to repentance.  From this passage of Scripture, you can insert your name in the formula, “I have loved ___,” says the Lord.  Don’t debate Him, just believe.