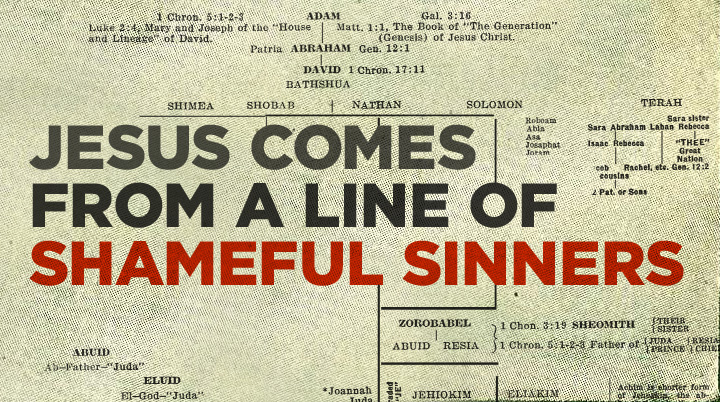 Many wonder why the genealogy of Christ is a necessary part of the Bible.  A simple family tree does not necessarily make for good reading, but there are many things in this genealogy that are extremely interesting and encouraging to the reader upon a closer look.  When one looks at this genealogy, there are many flawed and even unsavory characters in this genealogy.  Abraham was called of God to be the father of a nation, but was prone to lying and even became so discouraged that he got hung up in Haran on the way to the promised land.  Jacob was a sneak, a supplanter, a trickster, cheating his brother out of many things, and finding a way to prosper at his father-in-law’s expense, yet became the father of 12 tribes.  Judah was defined as “praise,” but also fathered part of the line of Jesus’ descent with Tamar, his daughter-in-law, who was posing as a prostitute in order to get pregnant.  Wow!  This is taudry and unseemly for the bloodline of the Savior, but the story does not end there.  Rahab was a literal harlot and lived in the city destroyed by God as the Israelites came into the promised land.Ruth was not even a Jew, but a Moabite, a Gentile.  All these people were part of Jesus’ lineage, and had issues, each of them, that could make one question there right or qualification to be part of Jesus’ heritage.  Yet there is more.

The final piece of this story for today is the story of David and Bathsheba.  Here is a man chosen by God to be king, who was also called a “man after God’s own heart!”  Yet he committed adultery and then killed his lover’s husband.  How could this man be in the line of Christ?

The message of this genealogy is clear:  God uses ordinary people to do His work.  These flawed individuals contributed to the family tree that eventually led to the Savior of the World.  So, while God has a standard of holiness for His people–and longs for us to live righteously–God, in His gradce, uses people with problems and sin to complete His work and will.  The key for those of us who are not perfect is to not remain in our sin, not to ignore the call of God to a higher standard of life and ethical behavior.  Instead, we must rise above our faults and become the men and women that God intend for us to be.  Ordinary people can still be useful to the kingdom of God.

An additional note here is important.  The beginnings of Mark and Luke do not necessarily mirror this passage exactly, but have unique beginnings as well.  Mark simply gives an announcement that he is beginning the gospel of Jesus Christ, while Luke, the physician gives a technical explanation of how he intends to give a detailed narrative from the words of eyewitnesses and put together an orderly account.  He addresses his gospel to Theophilus, who could have been an actual individual that came under the tutelage of either Paul or Luke (Luke was Paul’s companion on this missionary journeys, recording the history of the New Testament church in the book of Acts).  However, Theophilus, which translates “Friend of God,” could be anyone who is a Christian and seeking information and instruction on the things of God.

Luke also provided a genealogy of Christ, but he traces the roots back differently, and goes all the way back to Adam.  It was common for the Jewish people to trace genealogies differently, depending of the purpose of the genealogy.  They would sometimes even skip generations, because it was considered appropriately to say that anyone in your genealogical past was your father.  People called Abraham their father in the days of Jesus, even though he was many generations prior to their own father.  Matthew and Luke had different purposes.  Matthew emphasized the Abrahamic-Davidic line, while Luke emphasized the Adamic line, both of which were correct according to Jewish custom.  The bottom line is this:  Jesus came from flawed, sin-plagued people to redeem people just like them.  There is hope for anyone because of Jesus!

One thought on “Ordinary People”