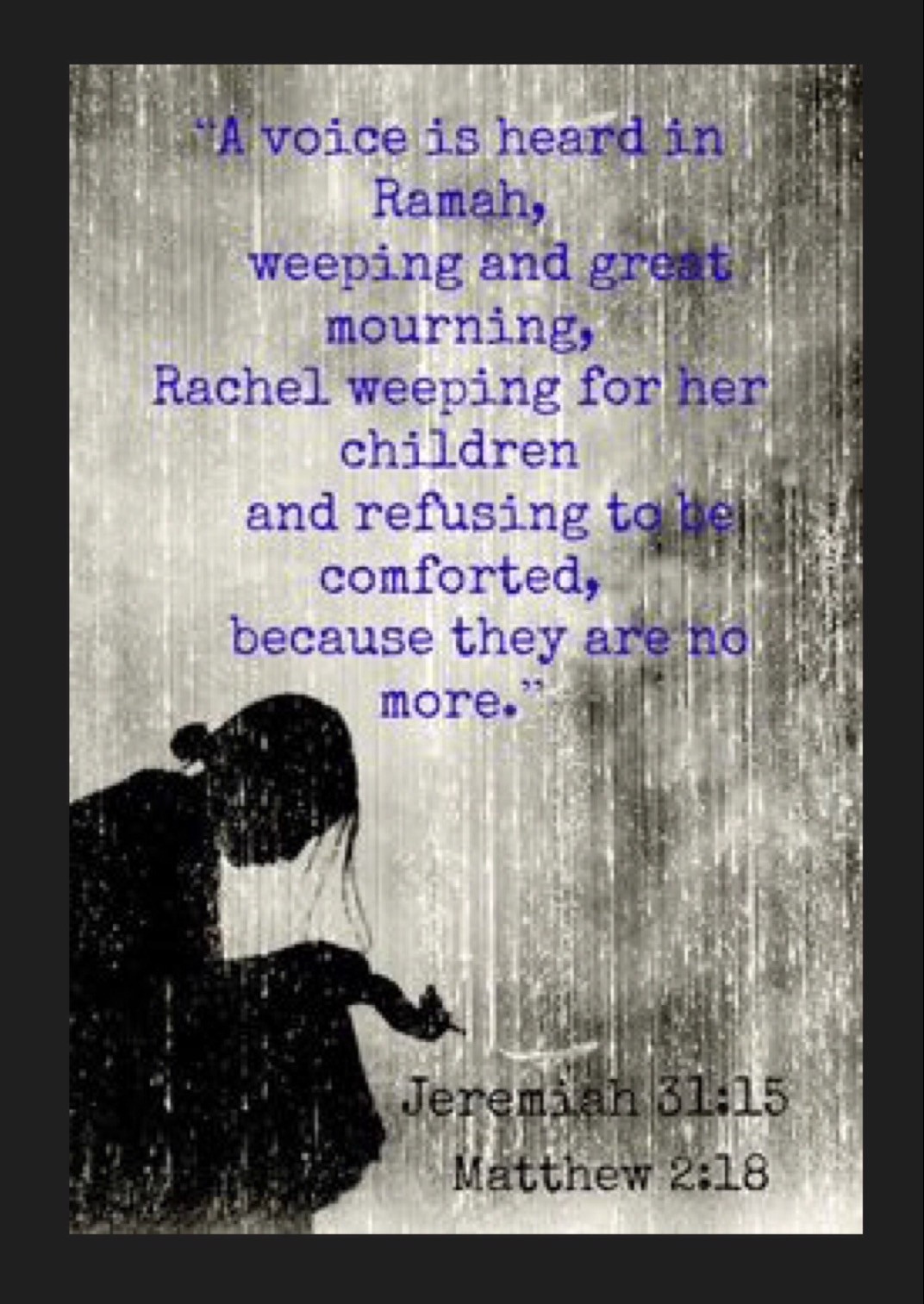 Weeping in Ramah (God Always Has a Plan)

13 Now when they had departed, behold, an angel of the Lord appeared to Joseph in a dream, saying, “Arise, take the young Child and His mother, flee to Egypt, and stay there until I bring you word; for Herod will seek the young Child to destroy Him.”

14 When he arose, he took the young Child and His mother by night and departed for Egypt, 15 and was there until the death of Herod, that it might be fulfilled which was spoken by the Lord through the prophet, saying, “Out of Egypt I called My Son.”

Another prophecy is fulfilled here as Joseph was warned in another dream to flee from Herod to Egypt for a season since he was determined to destroy Jesus.  This was to fulfill a prophecy from Hosea, which said “out of Egypt I called My Son.”

16 Then Herod, when he saw that he was deceived by the wise men, was exceedingly angry; and he sent forth and put to death all the male children who were in Bethlehem and in all its districts, from two years old and under, according to the time which he had determined from the wise men. 17 Then was fulfilled what was spoken by Jeremiah the prophet, saying:

18“Avoice was heard in Ramah,

Rachel weeping for her children,

Refusing to be comforted,

Because they are no more.”

As was mentioned in yesterday’s blog, Herod sought to kill all the male Hebrew children aged two and younger in response to his fear of a new king.  The wise men did not return to him so that he could just destroy the baby of whom they spoke, so he went on a killing spree in an attempt to kill Jesus among the many.  This also fulfilled a prophecy by Jeremiah of the lamentation and weeping as a result of children being killed.

22 But when he heard that Archelaus was reigning over Judea instead of his father Herod, he was afraid to go there. And being warned by God in a dream, he turned aside into the region of Galilee. 23 And he came and dwelt in a city called Nazareth, that it might be fulfilled which was spoken by the prophets, “He shall be called a Nazarene.”

After Herod’s death, Joseph and Mary returned to Israel, comforted in a dream, but avoided Judea because Herod’s son ruled in his place.  They settled in Nazareth instead, fulfilling another prophecy from the book of Judges stating that He would be a Nazarite (Nazarene).  God’s will was foretold years before the birth of Christ, and was fulfilled in response to His will and plan. God foreknew all things before the beginning of the earth, and works accordingly.

When we do not understand what is happening in our lives, even if this lack of understanding seems to foster fear and doubt, remember stories like these.  God is not caught by surprise, He is not unaware.  Instead, God has every situation in hand.  He knows your circumstances and will use them for His glory if you will allow Him to do so.  Trust in the Lord, even when you weep in Ramah.  Trust Him even when you are on the run from an enemy.  When God gives you a dream or a vision, heed His warnings and be saved.  God always has a plan.  Trust it!