18 While He spoke these things to them, behold, a ruler came and worshiped Him, saying, “My daughter has just died, but come and lay Your hand on her and she will live.” 19 So Jesus arose and followed him, and so did His disciples.

20 And suddenly, a woman who had a flow of blood for twelve years came from behind and touched the hem of His garment.

21 For she said to herself, “If only I may touch His garment, I shall be made well.” 22 But Jesus turned around, and when He saw her He said, “Be of good cheer, daughter; your faith has made you well.” And the woman was made well from that hour.

23 When Jesus came into the ruler’s house, and saw the flute players and the noisy crowd wailing, 24 He said to them, “Make room, for the girl is not dead, but sleeping.” And they ridiculed Him. 25 But when the crowd was put outside, He went in and took her by the hand, and the girl arose. 26 And the report of this went out into all that land. 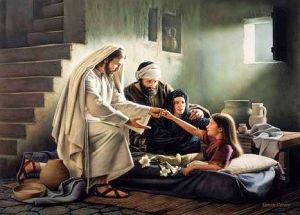 In this story within a story, Jesus is approached by two different people, among a throng, who have similar, but distinct needs.  The woman needed healing, and the child needed raising from the dead.  Some interpret this as a statement that an older generation needs to be healed (made right, straightened up, strengthened) before the younger generation can be brought to life.  While this has some ramifications for today, I think the bigger picture here is that desperate people, like the woman with the issue of blood and the ruler, can come to Jesus and find relief.  Don’t give up on life, for God has the answer to your issues.

27 When Jesus departed from there, two blind men followed Him, crying out and saying, “Son of David, have mercy on us!”

28 And when He had come into the house, the blind men came to Him. And Jesus said to them, “Do you believe that I am able to do this?”

29 Then He touched their eyes, saying, “According to your faith let it be to you.” 30 And their eyes were opened. And Jesus sternly warned them, saying, “See that no one knows it.” 31 But when they had departed, they spread the news about Him in all that country.

Additionally, two blind men followed Jesus, crying out to Him in desperation for their healing.  Jesus asked if they believed He could heal them of the blindness and they responded that they did.  Jesus then touched their eyes and they were healed.  The news of His ability to heal spread throughout the land.  Believe in Christ for that for which you have need, then spread the word of His abilities to everyone.  The world needs Jesus.  You have Jesus.  Spread the blessing!