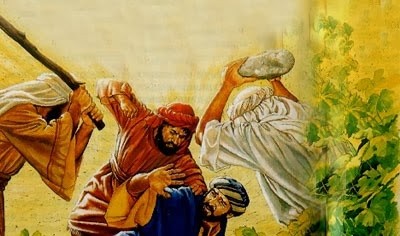 When the Stone Falls

33 “Hear another parable: There was a certain landowner who planted a vineyard and set a hedge around it, dug a winepress in it and built a tower. And he leased it to vinedressers and went into a far country. 34 Now when vintage-time drew near, he sent his servants to the vinedressers, that they might receive its fruit. 35 And the vinedressers took his servants, beat one, killed one, and stoned another. 36 Again he sent other servants, more than the first, and they did likewise to them. 37 Then last of all he sent his son to them, saying, ‘They will respect my son.’ 38 But when the vinedressers saw the son, they said among themselves, ‘This is the heir. Come, let us kill him and seize his inheritance.’ 39 So they took him and cast him out of the vineyard and killed him.
40 “Therefore, when the owner of the vineyard comes, what will he do to those vinedressers?”
41 They said to Him, “He will destroy those wicked men miserably, and lease his vineyard to other vinedressers who will render to him the fruits in their seasons.”
42 Jesus said to them, “Have you never read in the Scriptures:

‘The stone which the builders rejected
Has become the chief cornerstone.
This was the LORD’s doing,
And it is marvelous in our eyes’?

43 “Therefore I say to you, the kingdom of God will be taken from you and given to a nation bearing the fruits of it. 44 And whoever falls on this stone will be broken; but on whomever it falls, it will grind him to powder.”
45 Now when the chief priests and Pharisees heard His parables, they perceived that He was speaking of them. 46 But when they sought to lay hands on Him, they feared the multitudes, because they took Him for a prophet.

Jesus here shares a parable of a vineyard owner who leased out his vineyard to stewards, who would abide by an agreement to supply him with some of the vintage from the fruit. They beat all of his envoys and sent them back empty-handed. When the vineyard owner sent his son to get his share, they killed him, hoping to take his inheritance. When the owner found out, he had the vinedressers destroyed and gave the vineyard to others.

The self-pious religious leaders of Jesus’ day were the evil vinedressers, and the son was Jesus, whom they would kill in not many days. God was giving the world the advance notice of what would happen to those who reject Christ. Jesus is the cornerstone, rejected and killed for the sins of many. However, those who reject or oppose Him will be broken and crushed. The leaders were highly offended, and wanted to take Jesus and punish Him, but they were afraid of the reaction of the crowds.

This powerful story of evil men and a loving father demonstrates the plan of God and the sacrifice made for our sins. The difference is that fact that God would forgive anyone, even the killers of His own son if they would repent and obey. He will do the same for you. However, if you are a religious person without a true relationship with Jesus, and you continue in that lie, you can be replaced. False religious piety will not stand. God will replace those who are fake. Don’t be fake! Don’t let the stone fall on you.