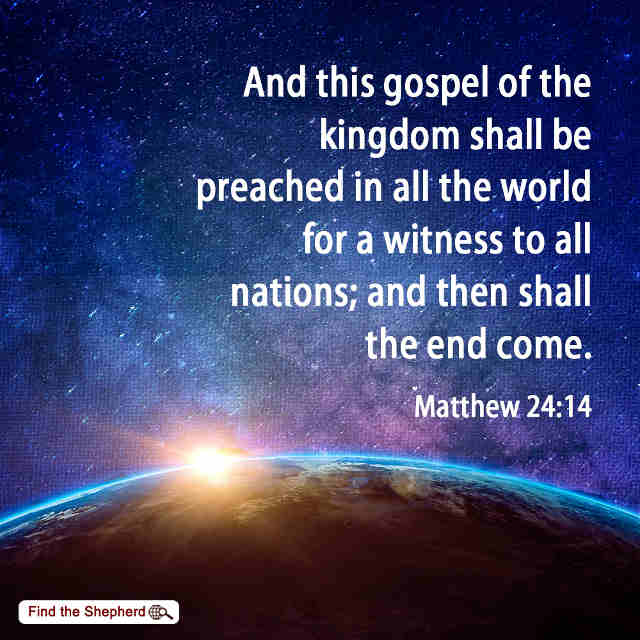 4 And Jesus answered and said to them: “Take heed that no one deceives you. 5 For many will come in My name, saying, ‘I am the Christ,’ and will deceive many. 6 And you will hear of wars and rumors of wars. See that you are not troubled; for all these things must come to pass, but the end is not yet. 7 For nation will rise against nation, and kingdom against kingdom. And there will be famines, pestilences, and earthquakes in various places. 8 All these are the beginning of sorrows. 9 “Then they will deliver you up to tribulation and kill you, and you will be hated by all nations for My name’s sake. 10 And then many will be offended, will betray one another, and will hate one another. 11 Then many false prophets will rise up and deceive many. 12 And because lawlessness will abound, the love of many will grow cold. 13 But he who endures to the end shall be saved. 14 And this gospel of the kingdom will be preached in all the world as a witness to all the nations, and then the end will come.

While this passage does not refer to the Great Tribulation after the rapture of the Church, it does refer to a latter day tribulation of the saints as Satan attacks God’s church through ungodly individuals and groups that persecute and punish Christians as part of a run-up to the rapture. False Christs, wars, national conflicts, famine, sickness and disease, natural disasters will al happen in addition to the tribulation of the church and its people. This treatment of the church will lead to apostacy and attrition in the church. Jesus declares that those to endure will be saved. This could mean that endurance is the key, or it could simply mean that those who are truly saved will walk in the strength of their relationship with God. Either way, endurance is a key. The mission, the Great Commission, was and is the work of the Church to be completed before Jesus comes. We must preach the gospel and disciple believers.

15 “Therefore when you see the ‘abomination of desolation,’ spoken of by Daniel the prophet, standing in the holy place” (whoever reads, let him understand), 16 “then let those who are in Judea flee to the mountains. 17 Let him who is on the housetop not go down to take anything out of his house. 18 And let him who is in the field not go back to get his clothes. 19 But woe to those who are pregnant and to those who are nursing babies in those days! 20 And pray that your flight may not be in winter or on the Sabbath. 21 For then there will be great tribulation, such as has not been since the beginning of the world until this time, no, nor ever shall be. 22 And unless those days were shortened, no flesh would be saved; but for the elect’s sake those days will be shortened.

At the beginning of this section, the focus shifts from a discussion of the perilous times leading up to the rapture to a discussion of what will happen just after the rapture. The abomination of desolation has–like many prophetic statements–a present and a future application. The immediate fulfillment came in “168 b.c., accomplished by Antiochus Epiphanes as a part of his attempt to wipe out Judaism (the exact phrase βδέλυγμα ἐρημώσεως is used to refer to the image set upon the altar in the description of this event in 1 Macc 1:54; cf. too 2 Macc 8:17; for parallel instances concerning images, see Jos., Ant. 18.3.1 §§55–59; 18.8.2–9 §§261–309). Jesus adopts the same language to indicate that a similar desecration of the temple will occur.”* Only in this case, it is not an human force like Antiochus that stands in the holy place, but rather the AntiChrist, who will rule the world under a velvet-covered iron fist. The first half of his reign will appear joyful and blessed like velvet strokes, while the torturous final three and one-half years will be the dropping of the iron fist. Jesus warns of the horror to come.

23 “Then if anyone says to you, ‘Look, here is the Christ!’ or ‘There!’ do not believe it. 24 For false christs and false prophets will rise and show great signs and wonders to deceive, if possible, even the elect. 25 See, I have told you beforehand. 26 “Therefore if they say to you, ‘Look, He is in the desert!’ do not go out; or ‘Look, He is in the inner rooms!’ do not believe it.

Finally, Jesus gives a warning not to be deceived by the false Christs and prophets that will even perform miracles to deceive even those who are destined for salvation. Do not allow the world or its demonic influences to deceive you. Stand true on the Biblical truths you know. Serve the God of your salvation, and you will be saved. Don’t let bad news quell your zeal for the great God of your salvation! The persecution will come, but you will stand if you do not doubt.