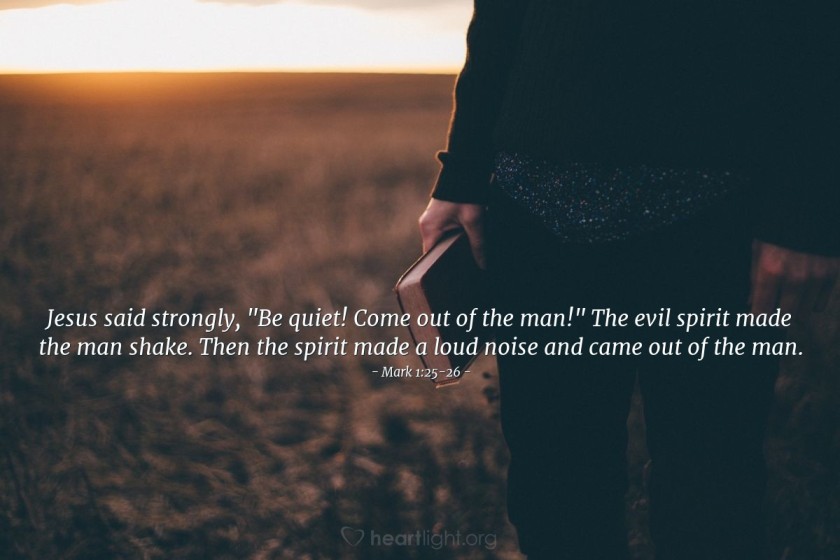 21 Then they went into Capernaum, and immediately on the Sabbath He entered the synagogue and taught. 22 And they were astonished at His teaching, for He taught them as one having authority, and not as the scribes.
23 Now there was a man in their synagogue with an unclean spirit. And he cried out, 24 saying, “Let us alone! What have we to do with You, Jesus of Nazareth? Did You come to destroy us? I know who You are—the Holy One of God!”
25 But Jesus rebuked him, saying, “Be quiet, and come out of him!” 26 And when the unclean spirit had convulsed him and cried out with a loud voice, he came out of him. 27 Then they were all amazed, so that they questioned among themselves, saying, “What is this? What new doctrine is this? For with authority He commands even the unclean spirits, and they obey Him.” 28 And immediately His fame spread throughout all the region around Galilee.

Capernaum was the Galileean headquarters of Jesus’ ministry. In this particular story, Jesus arrived in town and immediately entered the synagogue. Jesus lived with purpose. He did not do things accidentally. He knew a demon-possessed man would be there. How could He do that? Because He moved in authority!

When the demon-possessed man approached Jesus, he recognized Who He was, and the demons began to beg Him not to destroy them. Jesus simply told them to be quiet and come out, which they did in a somewhat violent fashion. The convulsions they caused may have been a parting shot, or they may have been a sign of the enmeshed nature of the relationship between the demons and a man who allowed them to take over his life. Either way, they had to leave when the One with authority ordered them to do so.

What an example for us! If that does not track for you, think of it this way: Christians should live in a way that demons fear them. Instead of Christians cowering in the corner in fear, demons should hate to see a Christian walk in the door. How telling is it that a demon-possessed man walked around in the synagogue unafraid until Jesus walked in? Don’t be a powerless Christian, never even threatening the demonic powers of earth. Instead, develop a prayer life and a knowledge of the Word that will help you walk in authority. Take charge and take the authority that comes through an intimate relationship with God.