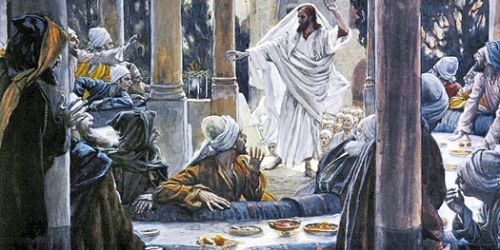 37 And as He spoke, a certain Pharisee asked Him to dine with him. So He went in and sat down to eat. 38 When the Pharisee saw it, he marveled that He had not first washed before dinner.
39 Then the Lord said to him, “Now you Pharisees make the outside of the cup and dish clean, but your inward part is full of greed and wickedness. 40 Foolish ones! Did not He who made the outside make the inside also? 41 But rather give alms of such things as you have; then indeed all things are clean to you.
42 “But woe to you Pharisees! For you tithe mint and rue and all manner of herbs, and pass by justice and the love of God. These you ought to have done, without leaving the others undone. 43 Woe to you Pharisees! For you love the best seats in the synagogues and greetings in the marketplaces. 44 Woe to you, scribes and Pharisees, hypocrites! For you are like graves which are not seen, and the men who walk over them are not aware of them.”

After doing miracles, healing, and teaching among the crowds in the place in which He earlier chose to pray, Jesus is invited to a Pharisee’s house for a meal. As they sat down to eat, the Pharisee was shocked that Jesus had not washed His hands (at least not as thoroughly) as the ritual tradition required. Jesus then, knowing His thoughts, commented on the facade of holiness that the Pharisees exhibited, looking good on the outside to the nth degree, while being unholy in their inward attitudes and feelings. The pretense behind their outward piety reflects their actual motive: pride. Jesus declares that the religious leaders are like graves, full of death, but appearing to be alive.

45 Then one of the lawyers answered and said to Him, “Teacher, by saying these things You reproach us also.”
46 And He said, “Woe to you also, lawyers! For you load men with burdens hard to bear, and you yourselves do not touch the burdens with one of your fingers. 47 Woe to you! For you build the tombs of the prophets, and your fathers killed them. 48 In fact, you bear witness that you approve the deeds of your fathers; for they indeed killed them, and you build their tombs. 49 Therefore the wisdom of God also said, ‘I will send them prophets and apostles, and some of them they will kill and persecute,’ 50 that the blood of all the prophets which was shed from the foundation of the world may be required of this generation, 51 from the blood of Abel to the blood of Zechariah who perished between the altar and the temple. Yes, I say to you, it shall be required of this generation.
52 “Woe to you lawyers! For you have taken away the key of knowledge. You did not enter in yourselves, and those who were entering in you hindered.”

Jesus then turns to the lawyers, or scribes, and places equal woe on them because they have made keeping the law to the strictest of interpretations and made it incumbent upon the common people to be as ceremoniously correct as the zealous Pharisees, of which they are part. Jesus equates it to putting a lethal load upon the people, knowing that they cannot fulfill the requirement.

Jesus then turns the discussion to the history of Israel in which they kill the prophets because they do not like the prophecy. Their fathers killed the prophets, but the Pharisees built their tombs. While the Pharisees would contend that the tombs were to honor the prophets, Jesus applies this connection in a way that is more like, “They killed the prophets: you make sure they stay dead.”* The scribes are complicit in the sins of their fathers, because they kill the prophetic strength of the work of the word of God by tying heavy loads on the people that will not allow for the work of God to be free.

53 And as He said these things to them, the scribes and the Pharisees began to assail Him vehemently, and to cross-examine Him about many things, 54 lying in wait for Him, and seeking to catch Him in something He might say, that they might accuse Him.

After these indictments against the Pharisees in general, and then their interpreters specifically, Jesus is assailed by them, hoping to catch Him in a small transgression of the Law in His words. The attacks against Christ are becoming more and more vehement as He is heading down the road to Calvary. What will you do with Jesus’ teaching? How will you respond when He calls out your lifestyle or religious leanings as unholy? Hear and heed the word of the Lord, for He is holy. Do not let your system or tradition get in the way of hearing the voice of God speaking to your soul.