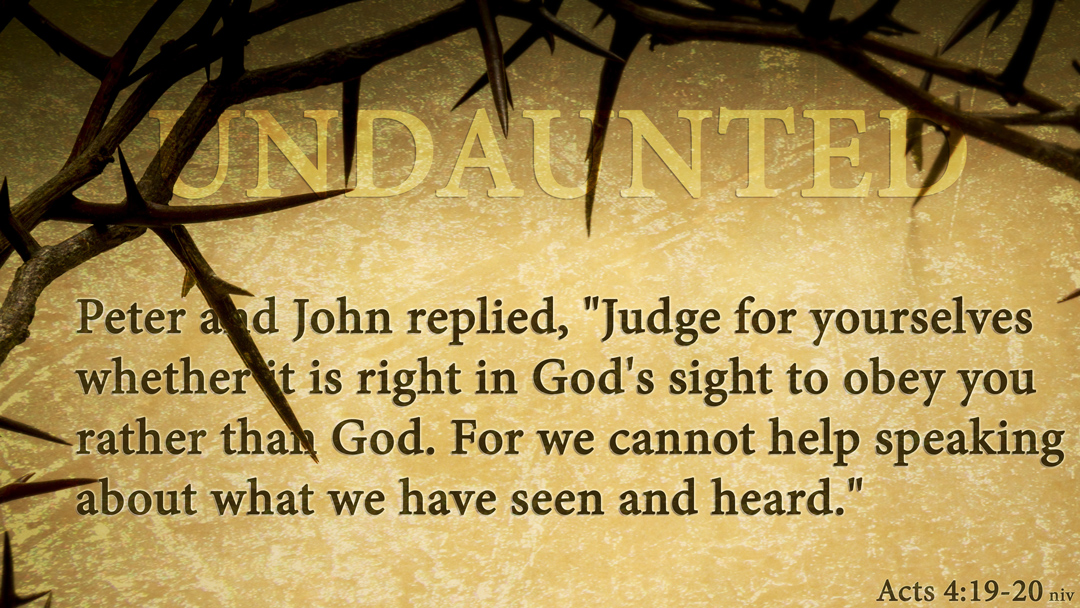 After the lame man was healed and as Peter preached in the portico of the temple, the word spread to the priests and Sadducees who came upon them and were disturbed. The tone changed drastically in that moment.

1 Now as they spoke to the people, the priests, the captain of the temple, and the Sadducees came upon them, 2 being greatly disturbed that they taught the people and preached in Jesus the resurrection from the dead. 3 And they laid hands on them, and put them in custody until the next day, for it was already evening. 4 However, many of those who heard the word believed; and the number of the men came to be about five thousand.

The leaders of the temple and of the Jews were agitated that the disciples of Christ taught the resurrection of Jesus. They considered this heretical and arrested them, incarcerating them until the next day. However, the work of the Holy Spirit was already evident as five thousand men (not counting their families) believed the gospel and became disciples of Christ as well. The church was growing exponentially, and revival was spreading through Jerusalem.

5 And it came to pass, on the next day, that their rulers, elders, and scribes, 6 as well as Annas the high priest, Caiaphas, John, and Alexander, and as many as were of the family of the high priest, were gathered together at Jerusalem. 7 And when they had set them in the midst, they asked, “By what power or by what name have you done this?”
8 Then Peter, filled with the Holy Spirit, said to them, “Rulers of the people and elders of Israel: 9 If we this day are judged for a good deed done to a helpless man, by what means he has been made well, 10 let it be known to you all, and to all the people of Israel, that by the name of Jesus Christ of Nazareth, whom you crucified, whom God raised from the dead, by Him this man stands here before you whole. 11 This is the ‘stone which was rejected by you builders, which has become the chief cornerstone.’ 12 Nor is there salvation in any other, for there is no other name under heaven given among men by which we must be saved.”

The religious leadership, in the Sanhedrin Council, called Peter, John, and the healed lame man before them to inquire as to the power by which they had done this healing. When questioned, Peter reminded them that a good deed, the healing of a helpless man had occurred. However, if you need to know how, this was done in the name of Jesus Christ, whom you crucified and God raised from the dead. Peter reminded them that the one they rejected has become the foundation stone for the future of faith as they knew it. His was now the name by which men must be saved.

13 Now when they saw the boldness of Peter and John, and perceived that they were uneducated and untrained men, they marveled. And they realized that they had been with Jesus. 14 And seeing the man who had been healed standing with them, they could say nothing against it. 15 But when they had commanded them to go aside out of the council, they conferred among themselves, 16 saying, “What shall we do to these men? For, indeed, that a notable miracle has been done through them is evident to all who dwell in Jerusalem, and we cannot deny it. 17 But so that it spreads no further among the people, let us severely threaten them, that from now on they speak to no man in this name.”
18 So they called them and commanded them not to speak at all nor teach in the name of Jesus. 19 But Peter and John answered and said to them, “Whether it is right in the sight of God to listen to you more than to God, you judge. 20 For we cannot but speak the things which we have seen and heard.” 21 So when they had further threatened them, they let them go, finding no way of punishing them, because of the people, since they all glorified God for what had been done. 22 For the man was over forty years old on whom this miracle of healing had been performed.

Seeing the boldness of Peter, and also admitting that a great healing, a kind act, had occurred, the council could not speak against it publicly. However, they did determine to threaten Peter and John, forbidding them to teach in the name of Jesus. However, Peter’s boldness showed up again as he and John told them that they must listen to the voice of God and speak what they had seen and heard. When the council observed their boldness and saw the favor which came to Peter and John through the approval of the people, they could not punish them. The kingdom of God was taking ground. The gospel was changing people’s lives. The culture was being changed.

How does this apply to the current world in which we live? Miracles are still possible today. Pray for the power of God to move in your life. Pray for the miracle-working anointing to be present at all times as you walk through this world. Change the culture by praising God, declaring the gospel, and taking opportunities to believe God for healing, deliverance, and divine provision in the lives of the lame, bound, and destitute among whom you walk every day. Be like Peter and John. Live unafraid and boldly as you follow the leadership of Christ and His Holy Spirit. Make a difference. Be unafraid. Live boldly!