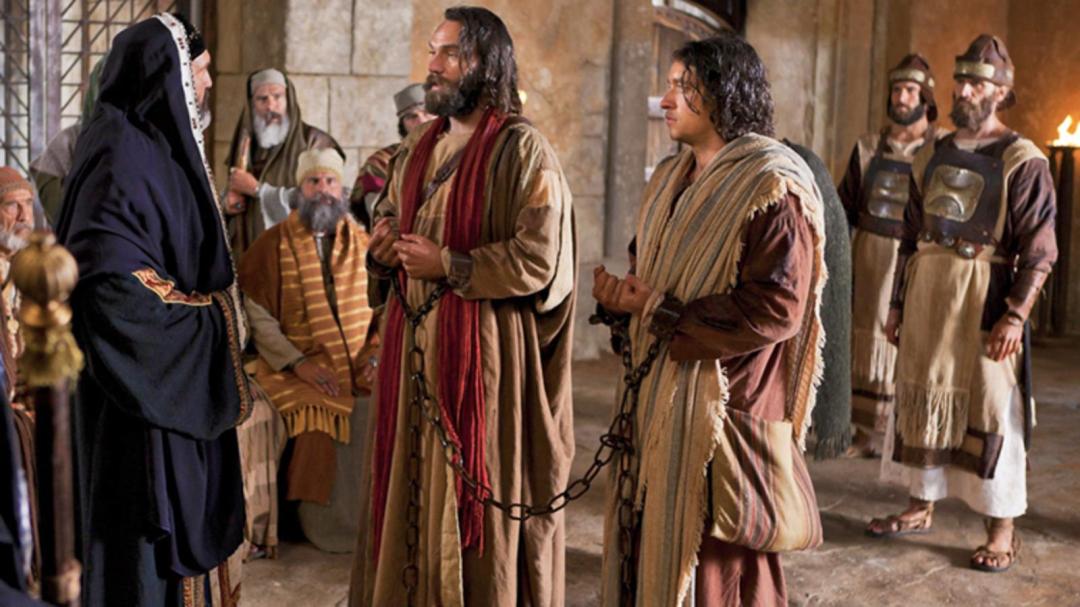 22 But when the officers came and did not find them in the prison, they returned and reported, 23 saying, “Indeed we found the prison shut securely, and the guards standing outside before the doors; but when we opened them, we found no one inside!” 24 Now when the high priest, the captain of the temple, and the chief priests heard these things, they wondered what the outcome would be. 25 So one came and told them, saying, “Look, the men whom you put in prison are standing in the temple and teaching the people!”
26 Then the captain went with the officers and brought them without violence, for they feared the people, lest they should be stoned. 27 And when they had brought them, they set them before the council. And the high priest asked them, 28 saying, “Did we not strictly command you not to teach in this name? And look, you have filled Jerusalem with your doctrine, and intend to bring this Man’s blood on us!”
29 But Peter and the other apostles answered and said: “We ought to obey God rather than men. 30 The God of our fathers raised up Jesus whom you murdered by hanging on a tree. 31 Him God has exalted to His right hand to be Prince and Savior, to give repentance to Israel and forgiveness of sins. 32 And we are His witnesses to these things, and so also is the Holy Spirit whom God has given to those who obey Him.”

After the angelic visit and deliverance from prison, Peters and the other apostles began to preach in the temple area again. While the Jewish leaders sent their guards to retrieve the apostles, they had already been set free. Their surprise was compounded by the fact that, not only were they free, but they were directly disobeying the orders of the leaders by teaching and preaching Jesus again! This boldness was offensive to the Jewish leaders, and they brought them, without violence, before the council and questioned them, scolding them for their disobedience. Peter and the others simply said that they must obey God rather than men. They reminded the Jewish leaders that Jesus had risen from the dead and was now the Prince and Savior of heaven, and they must bear witness of these things.

33 When they heard this, they were furious and plotted to kill them. 34 Then one in the council stood up, a Pharisee named Gamaliel, a teacher of the law held in respect by all the people, and commanded them to put the apostles outside for a little while. 35 And he said to them: “Men of Israel, take heed to yourselves what you intend to do regarding these men. 36 For some time ago Theudas rose up, claiming to be somebody. A number of men, about four hundred, joined him. He was slain, and all who obeyed him were scattered and came to nothing. 37 After this man, Judas of Galilee rose up in the days of the census, and drew away many people after him. He also perished, and all who obeyed him were dispersed. 38 And now I say to you, keep away from these men and let them alone; for if this plan or this work is of men, it will come to nothing; 39 but if it is of God, you cannot overthrow it—lest you even be found to fight against God.”
40 And they agreed with him, and when they had called for the apostles and beaten them, they commanded that they should not speak in the name of Jesus, and let them go. 41 So they departed from the presence of the council, rejoicing that they were counted worthy to suffer shame for His name. 42 And daily in the temple, and in every house, they did not cease teaching and preaching Jesus as the Christ.

The council became furious at the apostles’ presumed-rebellious response, and would have killed them in their anger. Before they took that extreme action, though, Gamaliel–wise elder that he was–asked for a private meeting with the council. He reminded them of a few zealots that had rebelled against the Jewish leadership and had eventually failed in their efforts. He suggested letting this most recent sect alone, and if they were not of God, they would fizzle out and go away. However, if this sect was acting on God’s direction, the council would not want to be opposed to its action, for they would be opposed to God Himself! The council agreed, had the men beaten, and commanded them not to preach Jesus. Yet, they did. They preached Jesus every day in every place they could. They never stopped.

Today, especially in our current political climate, there is much opposition to a Biblical viewpoint, a Christian worldview. The world longs for tolerance and a permissive gospel, not a grace gospel that loves the sinner but despises the sin. While the church may be guilty at times of speaking hatefully and without love, the message still rings true today: Jesus is the Way to salvation and eternal life. If the church will continue to speak the truth in love and preach the truth of the grace of God found in Jesus Christ, we will reap a harvest and see souls saved in the last days. Be bold, be committed, and be like Jesus! Stand for Him and you will be successful, even if you carry a bruise here and there. Count it joy to suffer for Him.