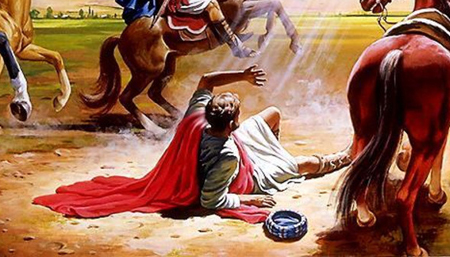 1 Then Saul, still breathing threats and murder against the disciples of the Lord, went to the high priest 2 and asked letters from him to the synagogues of Damascus, so that if he found any who were of the Way, whether men or women, he might bring them bound to Jerusalem.
3 As he journeyed he came near Damascus, and suddenly a light shone around him from heaven. 4 Then he fell to the ground, and heard a voice saying to him, “Saul, Saul, why are you persecuting Me?”
5 And he said, “Who are You, Lord?”
Then the Lord said, “I am Jesus, whom you are persecuting. It is hard for you to kick against the goads.”
6 So he, trembling and astonished, said, “Lord, what do You want me to do?”
Then the Lord said to him, “Arise and go into the city, and you will be told what you must do.”
7 And the men who journeyed with him stood speechless, hearing a voice but seeing no one. 8 Then Saul arose from the ground, and when his eyes were opened he saw no one. But they led him by the hand and brought him into Damascus. 9 And he was three days without sight, and neither ate nor drank.

This account of Saul’s encounter with Jesus on the Road to Damascus is quite dramatic. Saul had received letters, or authorizations, from the high priest of the Jews to arrest anyone he found who professed to follow Jesus Christ. He journeyed to Damascus to find any Christians there, and was arrested himself by a light shining from heaven which toppled him from his beast of burden. The voice, later self-identified as Jesus, asked Saul why he was persecuting Him. Saul was utterly confused, and asked the voice to identify Himself. Upon Jesus’ response, Saul asked what He wanted him to do. The simple response was to go into Damascus and wait for instructions. He obeyed the voice, even though blinded for three days, and also fasted for that entire waiting period. Those around him saw no one, and only heard a voice, but perhaps not the exact wording. It was an awesome and puzzling event.

Many call this the conversion of Saul, and perhaps it was. Somewhere between this event and Saul’s baptism (to be discussed in the next blog tomorrow), Saul was converted and aimed to persecute the church no more. Instead, he would become part of the church and work in league with its leaders to spread the gospel in a miraculous soul-winning and church-establishing movement throughout Asia Minor and into Europe. Saul became one of the great evangelists and apostolic leaders of the New Testament church. But it all started with a stiff-necked, hard-hearted man being struck down temporarily so that he would listen to the God he thought he served. The lesson we take from this amazing story is one of spiritual sensitivity. What will it take for an individual to listen to the voice of God? God may have a powerful work for you to do, but are you listening to His call? Be sensitive to the Holy Spirit, and hear as He speaks, for He has something to say to you. Don’t run past the oracle. Don’t whisk away while Jesus is giving you instructions. Don’t require God to meet you on your Damascus Road with a blinding light to get your attention. Listen, for He speaks!