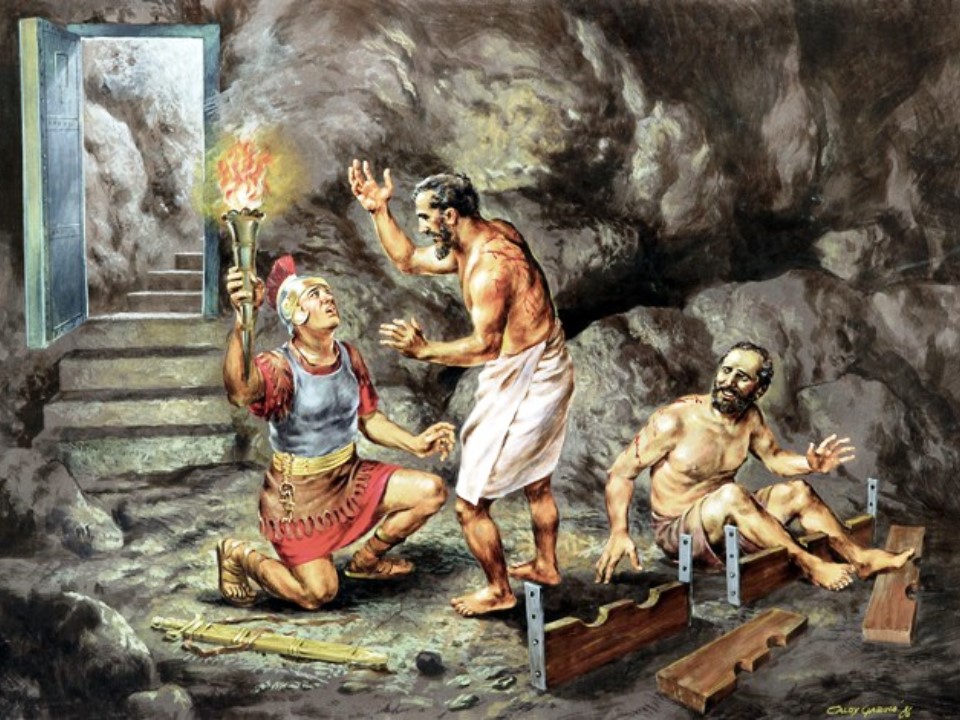 25 But at midnight Paul and Silas were praying and singing hymns to God, and the prisoners were listening to them. 26 Suddenly there was a great earthquake, so that the foundations of the prison were shaken; and immediately all the doors were opened and everyone’s chains were loosed. 27 And the keeper of the prison, awaking from sleep and seeing the prison doors open, supposing the prisoners had fled, drew his sword and was about to kill himself. 28 But Paul called with a loud voice, saying, “Do yourself no harm, for we are all here.”

Paul and Silas, like Peter earlier in Acts, had roused a mob of sorts against their ministry to the point that they were beaten and put in jail in stocks under the oversight of a Philippian jailer. There response is priceless, Instead of jailing over their plight, Paul and Silas began to pray and sing to the Lord. The other prisoners were aware of their activity, listening in their own cells. Out of nowhere, an earthquake occurred, opening all the prison doors and loosing everyone’s chains. The jailer stirred, ran in, and drew a sword to kill himself. He assumed that everyone had fled, and that he would be killed anyway for letting prisoners escape. Everyone was shocked and stunned, but they were all present and unharmed by the earthquake. Paul cried out such to him, to prevent the jailer from harming himself.

29 Then he called for a light, ran in, and fell down trembling before Paul and Silas. 30 And he brought them out and said, “Sirs, what must I do to be saved?”
31 So they said, “Believe on the Lord Jesus Christ, and you will be saved, you and your household.” 32 Then they spoke the word of the Lord to him and to all who were in his house. 33 And he took them the same hour of the night and washed their stripes. And immediately he and all his family were baptized. 34 Now when he had brought them into his house, he set food before them; and he rejoiced, having believed in God with all his household.

Once the jailer confirmed that everyone was still present, he ran into Paul and Silas’s cell and fell in a trembling heap before them, asking what he needed to do to be saved. They told him that he must simply believe. Then they shared a word with him and his family, and they did believe. He washed the stripes on their backs, and Paul and Silas baptized the entire family. He fed them and they all rejoiced over the newfound faith in Christ they had received.

This story is amazing in the way that deliverance came to Paul and Silas. The miracles that happened here are myriad: a well-timed midnight earthquake, prisoners set free who did not escape, and a jailer’s family saved all in one night, and perhaps many other miracles that are not recorded. One’s imagination could run wild! Paul and Silas preached the gospel, prayed, and sang even in jail. Such faith they had. What a powerfully positive outlook they had. What a great opportunity for ministry their faith and attitude provided. When faced with persecution, ridicule, or simply opposition, have the attitude of Paul and Silas. Sing and pray in the midnight hour of your life, and expect a midnight miracle.