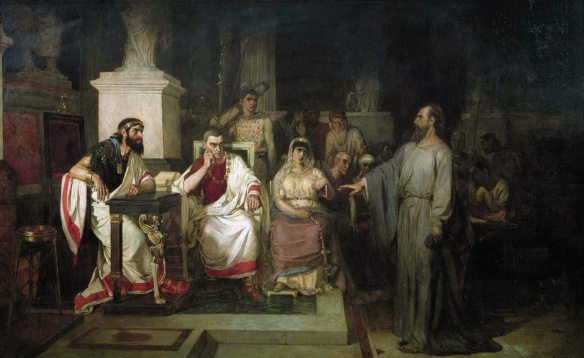 10 Then Paul, after the governor had nodded to him to speak, answered: “Inasmuch as I know that you have been for many years a judge of this nation, I do the more cheerfully answer for myself, 11 because you may ascertain that it is no more than twelve days since I went up to Jerusalem to worship. 12 And they neither found me in the temple disputing with anyone nor inciting the crowd, either in the synagogues or in the city. 13 Nor can they prove the things of which they now accuse me. 14 But this I confess to you, that according to the Way which they call a sect, so I worship the God of my fathers, believing all things which are written in the Law and in the Prophets. 15 I have hope in God, which they themselves also accept, that there will be a resurrection of the dead, both of the just and the unjust. 16 This being so, I myself always strive to have a conscience without offense toward God and men.
17 “Now after many years I came to bring alms and offerings to my nation, 18 in the midst of which some Jews from Asia found me purified in the temple, neither with a mob nor with tumult. 19 They ought to have been here before you to object if they had anything against me. 20 Or else let those who are here themselves say if they found any wrongdoing in me while I stood before the council, 21 unless it is for this one statement which I cried out, standing among them, ‘Concerning the resurrection of the dead I am being judged by you this day.’ ”

Paul’s opportunity to speak to the charges is recorded here. Paul respectfully acknowledges the governor, Felix, then begins to speak of the manner in which he conducted himself in Jerusalem. He went there to worship, and did not dispute with anyone or incite a riot. The witnesses allegations are unfounded. Paul asserts that he has, as part of the “sect” of Christianity, has still observed the Jewish customs and worship, according to the Law and Prophets. His conscience is clear. He came back to Jerusalem after much time away to offer alms and offerings, without any transgression of the law, and without a mob or posse. However, the Jews attacked him and accused him wrongfully, but the majority of them are not present to state their case.

22 But when Felix heard these things, having more accurate knowledge of the Way, he adjourned the proceedings and said, “When Lysias the commander comes down, I will make a decision on your case.” 23 So he commanded the centurion to keep Paul and to let him have liberty, and told him not to forbid any of his friends to provide for or visit him.
24 And after some days, when Felix came with his wife Drusilla, who was Jewish, he sent for Paul and heard him concerning the faith in Christ. 25 Now as he reasoned about righteousness, self-control, and the judgment to come, Felix was afraid and answered, “Go away for now; when I have a convenient time I will call for you.” 26 Meanwhile he also hoped that money would be given him by Paul, that he might release him. Therefore he sent for him more often and conversed with him.
27 But after two years Porcius Festus succeeded Felix; and Felix, wanting to do the Jews a favor, left Paul bound.

Felix responded to the charges and Paul’s defense with a continuation. He stated that he would rule on Paul’s case when Lysias, the commander of the garrison in Jerusalem, came to speak to him. However, Felix invited Paul to speak to his wife and him about the Way more fully. He actually stopped Paul during his discussion of righteousness, self-control, and judgment, presumably because he felt convicted. He sent Paul away until “a more convenient time.” Felix, as many corrupt leaders, hoped to receive a bribe from Paul, but Paul did not offer one. Therefore, Paul stayed in Caesarea for the next two years, and then Felix was succeeded as governor by Porcius Festus, and was then in charge of Paul’s disposition.

This period of Paul’s life was uncertain and restricted. Although Paul could have any visitors he pleased, he was under a type of house arrest and could not travel or continue in his missionary journeys. However, his influence and reach were not completely stymied. He still had disciples coming through to see him. He continued to converse with the churches through letters and messages. He had a leadership role in the Asia Minor work for the gospel. Paul felt as if he was obeying the plan and purpose of God, and continued to minister, even after being incarcerated without offense. How will you react to the unlawful works of the enemy against you? How will you respond when your work seems to be stopped in its tracks? Take a lesson from the example of Paul. Be faithful, keep working, even if in chains, and walk out your faith wherever you are. God is still God and He is still in control!