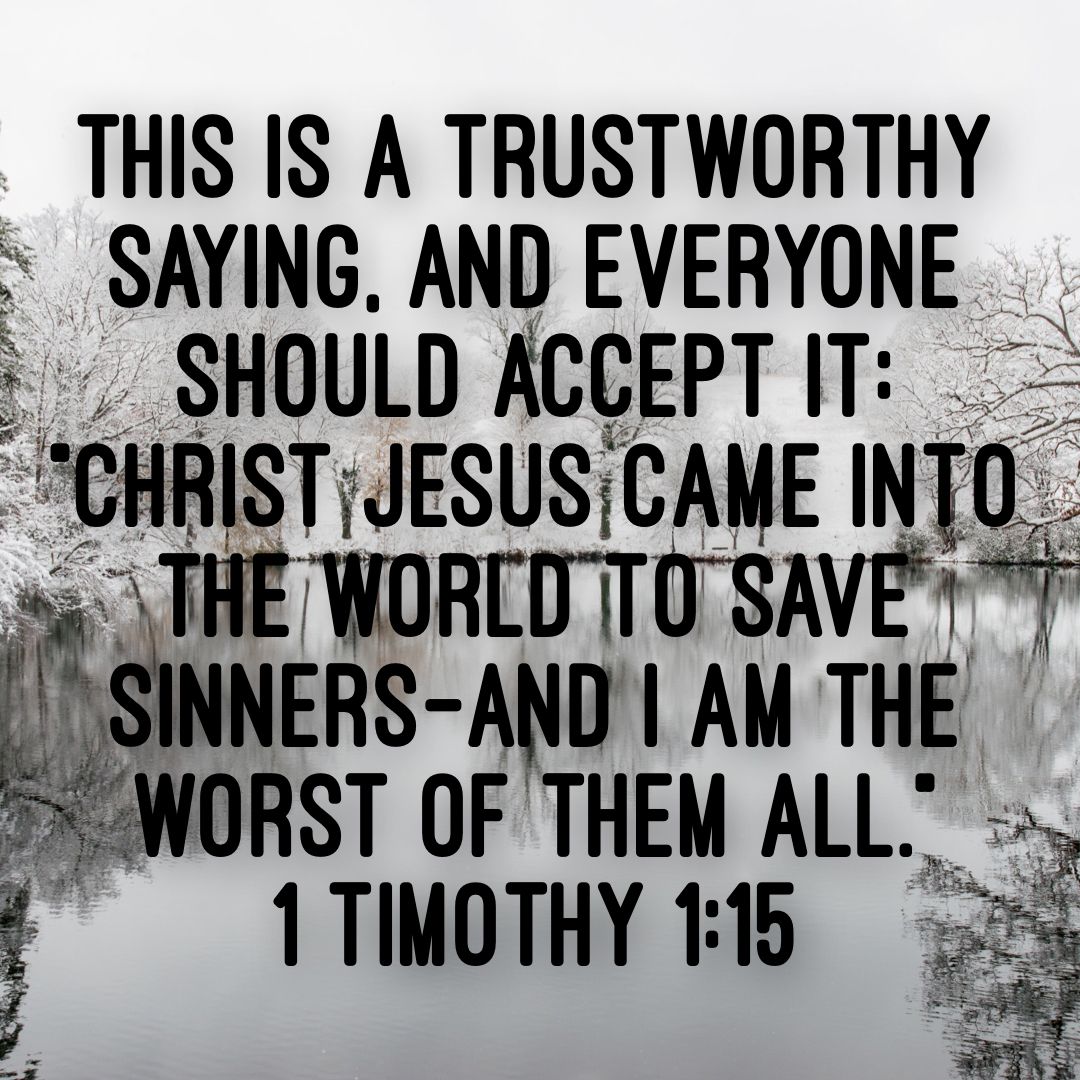 12 And I thank Christ Jesus our Lord who has enabled me, because He counted me faithful, putting me into the ministry, 13 although I was formerly a blasphemer, a persecutor, and an insolent man; but I obtained mercy because I did it ignorantly in unbelief. 14 And the grace of our Lord was exceedingly abundant, with faith and love which are in Christ Jesus. 15 This is a faithful saying and worthy of all acceptance, that Christ Jesus came into the world to save sinners, of whom I am chief. 16 However, for this reason I obtained mercy, that in me first Jesus Christ might show all longsuffering, as a pattern to those who are going to believe on Him for everlasting life. 17 Now to the King eternal, immortal, invisible, to God who alone is wise, be honor and glory forever and ever. Amen.

Paul reviews his own calling, given through the enabling of Jesus Christ. Paul admits that he did not deserve or earn his salvation or his calling. Instead, Jesus counted him faithful, even though he was once a rank sinner, blaspheming God, persecuting the church, being insolent or disrespectful toward God and man. In spite of his sinfulness, Paul obtained mercy. His ignorance of God’s will and plan allowed him another chance, and he latched onto it with gusto. He saw the grace of God as an abundant and powerful gift, exerting faith and love through Jesus Christ. Paul then makes it clear that his next statement is absolutely true and should be heard and believed by any and all who hear it: Jesus Christ came into the world to save sinners, even the worst. Paul calls himself a chief sinner, and in so doing tries to characterize the depth of love and mercy which he had received from Christ. Paul then makes it clear that the reason he was forgiven for such great sin was so that he could lead and exemplary life, teaching others that they could believe on Jesus Christ for salvation and everlasting life. He then offers a glorious worship statement to God to sum up this part of the passage: “Now to the King eternal, immortal, invisible, to God who alone is wise, be honor and glory forever and ever. Amen.” This worshipful statement serves as a doxology to his testimony.

18 This charge I commit to you, son Timothy, according to the prophecies previously made concerning you, that by them you may wage the good warfare, 19 having faith and a good conscience, which some having rejected, concerning the faith have suffered shipwreck, 20 of whom are Hymenaeus and Alexander, whom I delivered to Satan that they may learn not to blaspheme.

After his glorious account of the greatness of God’s mercy and the depths from which God saved Paul, the apostle turns his attention to Timothy, again reminding him of the charge made unto him by prophecy. He is called to wage the good warfare, have faith, and live with a good conscience. Paul chronicles the failures of others who started well in the faith who then rejected the faith and suffered what could be called spiritual shipwreck. He then calls out Hymenaeus and Alexander, two disciples who had to be delivered to Satan so that they may recognize their loss and repent of their blasphemy.

How does this testimony and charge apply to today’s Christian? Paul’s testimony should remind us to constantly be thankful for the salvation God has afforded us through His death and resurrection. Every one of us was a sinner before the grace of Christ was applied to our lives. We should be grateful to God every day, and respect the gift by living a life that responds to the grace, mercy, and holiness of Jesus Christ. Also, we must, like Timothy, respond to the call of God to wage warfare for the kingdom of God in holiness. Many people want to avoid hell, but do not want to live holy. Mankind often wants a Savior, but not a Lord. We want to miss hell, but do not want to live for Christ. With the gift comes a call. Salvation is free, but the life in Christ is a war. Understand that the war you wage is righteous, and that God is our commander. Follow Him and live holy, and the war will be won! Jesus Christ came to save sinners, even sinners as depraved as us. Respect and honor that mercy and carry out His purpose in this lost and dying world. There are other sinners out there just like you that need a Savior and a Lord. This is why He came.