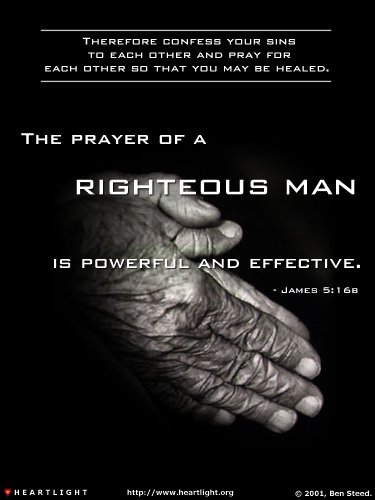 The Prayer of Faith

James sums up his letter to the twelve tribes dispersed abroad by addressing four things in chapter 5: the plight of the oppressive rich, the need for patience with and care for others, meeting the specific needs of those in the body, and redeeming those who have strayed. He has just spoken of the need to resist the devil and submit to God, and the need for humility. Now he moves into the aforementioned subjects found in this chapter.

1 Come now, you rich, weep and howl for your miseries that are coming upon you! 2 Your riches are corrupted, and your garments are moth-eaten. 3 Your gold and silver are corroded, and their corrosion will be a witness against you and will eat your flesh like fire. You have heaped up treasure in the last days. 4 Indeed the wages of the laborers who mowed your fields, which you kept back by fraud, cry out; and the cries of the reapers have reached the ears of the Lord of Sabaoth. 5 You have lived on the earth in pleasure and luxury; you have fattened your hearts as in a day of slaughter. 6 You have condemned, you have murdered the just; he does not resist you.

James starts with a call to lament. The rich should weep and howl for the miseries that are about to come. He calls their riches corrupt, and says that their garments are worn out and moth-eaten. Their precious metals are corroded, and that corrosion is a witness against the rich and will eat their flesh like fire. This sounds like a strong indictment against those who have heaped up treasure and hoarded wealth. They have kept back wages from laborers by fraud, and those wages cry out against the rich oppressors. The cries of the workers are heard by the Lord of Sabaoth (the Lord of Hosts). The rich live in pleasure and luxury. Their hearts are fattened by their riches, and they stand as a fattened calf waiting for slaughter before the judge of the earth. The rich have condemned and murdered the just, and those oppressed souls have not resisted the rich man’s oppression. This is a call to lament and repentance. The author calls them to repent before judgment falls upon them.

7 Therefore be patient, brethren, until the coming of the Lord. See how the farmer waits for the precious fruit of the earth, waiting patiently for it until it receives the early and latter rain. 8 You also be patient. Establish your hearts, for the coming of the Lord is at hand.
9 Do not grumble against one another, brethren, lest you be condemned. Behold, the Judge is standing at the door! 10 My brethren, take the prophets, who spoke in the name of the Lord, as an example of suffering and patience. 11 Indeed we count them blessed who endure. You have heard of the perseverance of Job and seen the end intended by the Lord—that the Lord is very compassionate and merciful.
12 But above all, my brethren, do not swear, either by heaven or by earth or with any other oath. But let your “Yes” be “Yes,” and your “No,” “No,” lest you fall into judgment.

James then shifts to an encouragement to the righteous. Be patient until the coming of the Lord, just like the farmer waits patiently for the fruit of the earth, waiting for it to receive the early and the latter rain and then produce that precious fruit. Those who wait on the Lord should wait patiently, for just as the farmer waits until fruit is produced, the child of God waits for the Lord to appear in the sky to redeem us to heaven. James then instructs the Christian to not grumble against one another so that they not be condemned. Just as with the rich, they must remember that the Judge is standing at the door! The prophets suffered and had patience as they delivered the word of the Lord. They are considered blessed, even though they endured such suffering. Job endured great suffering, but was restored to his prior riches once He showed he would endure and give praise to the Lord. The Lord was compassionate and merciful. Finally, James instructs the reader to not swear by heaven or earth and any other things. Let “Yes” be “Yes” and “No” be “No.” Anything else is evil, and those who swear will fall into judgment. Just be honest and do not deny your word to another.

13 Is anyone among you suffering? Let him pray. Is anyone cheerful? Let him sing psalms. 14 Is anyone among you sick? Let him call for the elders of the church, and let them pray over him, anointing him with oil in the name of the Lord. 15 And the prayer of faith will save the sick, and the Lord will raise him up. And if he has committed sins, he will be forgiven. 16 Confess your trespasses to one another, and pray for one another, that you may be healed. The effective, fervent prayer of a righteous man avails much. 17 Elijah was a man with a nature like ours, and he prayed earnestly that it would not rain; and it did not rain on the land for three years and six months. 18 And he prayed again, and the heaven gave rain, and the earth produced its fruit.

James moves here into a discussion of the need to minister to one another for whatever need is presented. If anyone is suffering, let him pray. If they are cheerful, then sing psalms. If they are sick, then call for the elders of the church, have them pray over that individual, anointing him or her with oil in the name of the Lord. This practice will facilitate healing. The prayer of faith will save the sick. The Lord will respond and raise up the sick one to be healed. This prayer can even bring about the forgiveness of sins. Prayer is powerful, and it is the primary way to see miracles take place. The prayer of faith is powerful! Confession and prayer can bring about healing and deliverance. The well-known, oft-quoted phrase that follows speaks to the power and efficacy of prayer: “The effective, fervent prayer of a righteous man avails much.” This statement establishes that prayer is a necessary and integral part of the arsenal of the believer. Jame then points to the example of Elijah, a man just like any other, who prayed earnestly for it not to rain, and it did not for three and one-half years. He prayed again, and the rain began again. The drought ended, and the earth produced fruit. The same can happen in the life of any believer who believes in faith when they pray!

19 Brethren, if anyone among you wanders from the truth, and someone turns him back, 20 let him know that he who turns a sinner from the error of his way will save a soul from death and cover a multitude of sins.

Finally, James instructs the believers reading the letter to go after those who have strayed from the truth and turn them back to the truth. This is necessary, because every soul is valuable, and should not be neglected when in danger. If you pursue a lost soul, wandering from the faith, and turn that sinner from the error of his way, you will save a soul from death and cover a multitude of sins. You may be the instrument of someone’s redemption, and the one who keeps that soul from hell. So, in James’s farewell instructions, he calls on the believer to refrain from oppressing others, to live patiently waiting for the coming of the Lord, to pray in faith for the healing, salvation, and deliverance of those in need, and to pursue those erring Christians that need a champion to save them from themselves. Be all that God intends for you to be. He will use you for His glory and make you strong. Pray the prayer of faith!