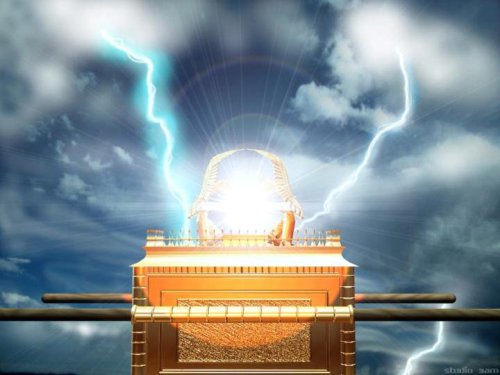 When the last passage concluded, the two witnesses were lying in the street dead, being made a public spectacle. In this passage, the story turns as the witnesses resurrect and the seventh trumpet sounds.

11 Now after the three-and-a-half days the breath of life from God entered them, and they stood on their feet, and great fear fell on those who saw them. 12 And they heard a loud voice from heaven saying to them, “Come up here.” And they ascended to heaven in a cloud, and their enemies saw them. 13 In the same hour there was a great earthquake, and a tenth of the city fell. In the earthquake seven thousand people were killed, and the rest were afraid and gave glory to the God of heaven.
14 The second woe is past. Behold, the third woe is coming quickly.

When the two witnesses rose from the dead, a voice called them up from the earth and they ascended to heaven on a cloud for all to see. The earth reacted with an earthquake, and people were killed, bringing fear upon the rest of those in the city. They, in turn, gave glory to God. The writer then announces that the second woe had passed, and the third woe is coming quickly. Again, this account is not necessarily presented in chronological order, for the two witnesses do not necessarily appear during the second half of the Tribulation, and the beast has not yet been seen. His formal appearance does not occur until later. There is a three and one-half year reference, so they do appear sometime during the Tribulation, but the exact placement is uncertain. The length of their death, although significant based on the time Christ was in the tomb and concerning Jewish tradition concerning the body and spirit after death, also speaks to the length of the tribulation half-period, as if they could be dormant for the last half of the period, yet arise and speak to those born during the tribulation or those who may be born during the millennium. However, the message is clear concerning the worship and witness of Christ. This set of events surrounding the measuring of the temple and the two witnesses can definitely signify the preservation of worship and the preservation of the witness of God. These two institutions will not be denied by the rejection of the inhabitants of the earth, nor will they be silenced forever. The gospel will be preached, and the witness shall continue.

15 Then the seventh angel sounded: And there were loud voices in heaven, saying, “The kingdoms of this world have become the kingdoms of our Lord and of His Christ, and He shall reign forever and ever!” 16 And the twenty-four elders who sat before God on their thrones fell on their faces and worshiped God, 17 saying:

“We give You thanks, O Lord God Almighty,
The One who is and who was and who is to come,
Because You have taken Your great power and reigned.
18 The nations were angry, and Your wrath has come,
And the time of the dead, that they should be judged,
And that You should reward Your servants the prophets and the saints,
And those who fear Your name, small and great,
And should destroy those who destroy the earth.”

19 Then the temple of God was opened in heaven, and the ark of His covenant was seen in His temple. And there were lightnings, noises, thunderings, an earthquake, and great hail.

The abrupt turn from the account of the two witnesses to this sounding of the seventh seal marks a shift from a picture on earth of the church and/or temple of God to a sighting of the heavenly temple. The declaration that accompanies the sounding of the seventh trumpet signals the renewal of the power of God and the worship of God as supreme. The “kingdoms of this world have become the kingdoms of our Lord and of His Christ,” is as clear a message as one can receive. He shall reign forever and ever! The twenty-four elders fell on their faces and worshipped God with poetic words of adoration to their King. They thank the Lord for His might, recognize His eternal existence, and bow before Him as King. They recognize that the nations were angry with God, but God has prevailed, and His wrath has been poured out. It is time for the dead to be judged, and that the righteous servants be rewarded. Those who fear the Lord and His name, regardless of background or perceived political or military power (or lack thereof) will fight alongside the Lord against the earth and its unrighteous inhabitants.

It was then that the temple of God in heaven, perhaps in the midst of the New Jerusalem. This heavenly temple contains elements similar to those included in the earthly temple, including the ark of the covenant. This may have been the archetype of what was built for the earthly temple, but nevertheless much more spectacular, as it is divine and eternal. Some scholars speculate that what John actually saw was the throne in heaven, as it is the true mercy seat where God forgives sin and judges mankind. Upon seeing such a glorious sight, John then hears noises, like thunder and lightning, an earthquake, and hail. Whether these are happening on earth or in heaven is uncertain. However, most understand these atmospheric phenomena are often metaphors for the voice of God. Therefore, what John heard could have been representative of the voice of God, sounding thunderously throughout the heavens. Whatever they were, they induced further awe for the vision of the temple in heaven and for what would happen next. It is as if God were sounding the seventh trumpet to announce the rehearsal of the salvific history of the earth in microcosm.