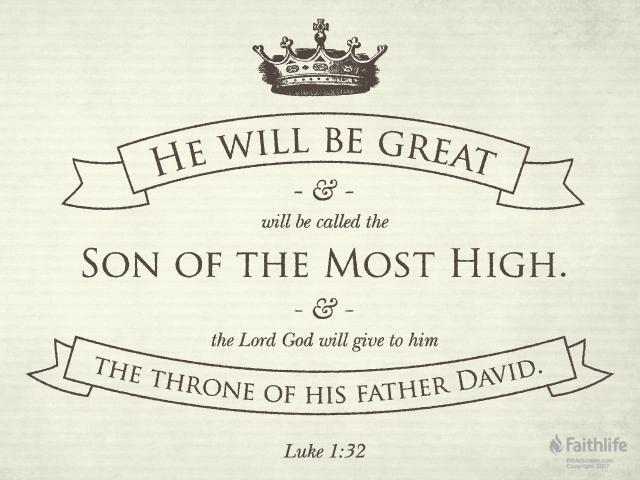 26 Now in the sixth month the angel Gabriel was sent by God to a city of Galilee named Nazareth, 27 to a virgin betrothed to a man whose name was Joseph, of the house of David. The virgin’s name was Mary. 28 And having come in, the angel said to her, “Rejoice, highly favored one, the Lord is with you; blessed are you among women!”
29 But when she saw him, she was troubled at his saying, and considered what manner of greeting this was. 30 Then the angel said to her, “Do not be afraid, Mary, for you have found favor with God. 31 And behold, you will conceive in your womb and bring forth a Son, and shall call His name JESUS. 32 He will be great, and will be called the Son of the Highest; and the Lord God will give Him the throne of His father David. 33 And He will reign over the house of Jacob forever, and of His kingdom there will be no end.”

Mary, a young Jewish girl who had never been with a man, was engaged to Joseph. In Jewish custom, she was actually considered betrothed (married) at this time, although she had not yet moved into Joseph’s home for their normal married life to begin. Therefore, she was a virgin, awaiting the consummation of their marriage commitment. This Jewish maiden was approached by an angel and pronounced as a highly favored woman. She feared at His presence and He comforted her, announcing that she would conceive and bear a son whom she would call Jesus. He spoke of the greatness of this man, including His royal purpose to sit on the throne of His father David.

34 Then Mary said to the angel, “How can this be, since I do not know a man?”
35 And the angel answered and said to her, “The Holy Spirit will come upon you, and the power of the Highest will overshadow you; therefore, also, that Holy One who is to be born will be called the Son of God. 36 Now indeed, Elizabeth your relative has also conceived a son in her old age; and this is now the sixth month for her who was called barren. 37 For with God nothing will be impossible.”
38 Then Mary said, “Behold the maidservant of the Lord! Let it be to me according to your word.” And the angel departed from her.

Mary, understandably, questioned this prophetic word, unclear of how she would conceive, since she was a virgin. The angel patiently described that she would not conceive by a man, but by a miracle of the Holy Spirit. Literally, the child would be the Son of God. He then revealed to Mary that her cousin, Elizabeth, had conceived a child in her old age as well, even though she had been barren. Mary then completely submits to the glorious message (Let it be to me…)and the angel departed.

This powerful interaction between Mary and the angel is a powerfully pensive moment in the life of the young lady. Scholars presume that Mary could have been as young as thirteen or fourteen at this time. This would be a nearly-overwhelming experience for anyone, but was also a moment that would solidify the purposes of God for this girl and the future of the world. What a glorious announcement of the coming of the Messiah and the hope of the earth for all who will believe!