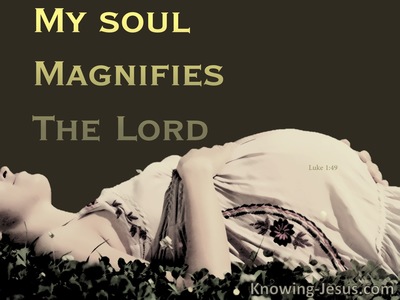 39 Now Mary arose in those days and went into the hill country with haste, to a city of Judah, 40 and entered the house of Zacharias and greeted Elizabeth. 41 And it happened, when Elizabeth heard the greeting of Mary, that the babe leaped in her womb; and Elizabeth was filled with the Holy Spirit. 42 Then she spoke out with a loud voice and said, “Blessed are you among women, and blessed is the fruit of your womb! 43 But why is this granted to me, that the mother of my Lord should come to me? 44 For indeed, as soon as the voice of your greeting sounded in my ears, the babe leaped in my womb for joy. 45 Blessed is she who believed, for there will be a fulfillment of those things which were told her from the Lord.”

The two women who were the subject of the promised child stories preceding the passage meet in this beautiful spiritual encounter. Elizabeth is filled with the Holy Spirit at the sight of Mary, the mother of Jesus. She began to prophesy immediately, declaring the blessing of Mary and her child, and the coming fulfillment of the angelic message. God confirmed His word over and over as they both moved headlong into the flow of God’s purposeful river of redemption.

“My soul magnifies the Lord,
47 And my spirit has rejoiced in God my Savior.
48 For He has regarded the lowly state of His maidservant;
For behold, henceforth all generations will call me blessed.
49 For He who is mighty has done great things for me,
And holy is His name.
50 And His mercy is on those who fear Him
From generation to generation.
51 He has shown strength with His arm;
He has scattered the proud in the imagination of their hearts.
52 He has put down the mighty from their thrones,
And exalted the lowly.
53 He has filled the hungry with good things,
And the rich He has sent away empty.
54 He has helped His servant Israel,
In remembrance of His mercy,
55 As He spoke to our fathers,
To Abraham and to his seed forever.”

56 And Mary remained with her about three months, and returned to her house.

In response to Elizabeth’s prophetic words of blessing, Mary breaks into song or poetry magnifying the Lord. She begins with thankfulness for His favor upon her, in spite of her lowly state, then begins to extol His greatness. She identifies His mercy, His strength, His provision, and His nearness to the fathers of her nation. This glorious, poetic song is a tribute to His greatness and power, and yet also to His immanence to His people.

This highly-charged moment is filled with the presence of the Holy Spirit. While the fullness of the Spirit would not be manifest until the day of Pentecost, this moment is an example of how the Holy Spirit worked in the lives of believers prior to Pentecost, going all the way back to the Creation. Elizabeth and Mary were moved by the Holy Spirit to prophesy and to declare praise unto their Mighty God. Allow the Holy Spirit to use you for His glory whenever possible. It is our calling and our privilege to praise Him and further His purpose on the earth. Come, Holy Spirit!