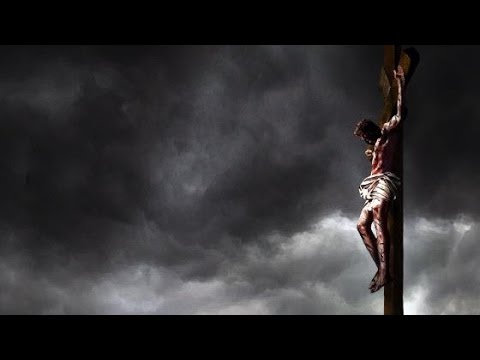 Philippians 2:5–8 (NKJV) Let this mind be in you which was also in Christ Jesus, who, being in the form of God, did not consider it robbery to be equal with God, but made Himself of no reputation, taking the form of a bondservant, and coming in the likeness of men. And being found in appearance as a man, He humbled Himself and became obedient to the point of death, even the death of the cross.

Forsaken in the Darkness

Matthew 27:45–50 (NKJV) Now from the sixth hour until the ninth hour there was darkness over all the land. And about the ninth hour Jesus cried out with a loud voice, saying, “Eli, Eli, lama sabachthani?” that is, “My God, My God, why have You forsaken Me?”

Some of those who stood there, when they heard that, said, “This Man is calling for Elijah!” 48 Immediately one of them ran and took a sponge, filled it with sour wine and put it on a reed, and offered it to Him to drink.
The rest said, “Let Him alone; let us see if Elijah will come to save Him.”
And Jesus cried out again with a loud voice, and yielded up His spirit.

Luke 23:45–46 (NKJV) Then the sun was darkened, and the veil of the temple was torn in two. And when Jesus had cried out with a loud voice, He said, “Father, ‘into Your hands I commit My spirit.’ ” Having said this, He breathed His last.

John 19:28–30 (NKJV) After this, Jesus, knowing that all things were now accomplished, that the Scripture might be fulfilled, said, “I thirst!” Now a vessel full of sour wine was sitting there; and they filled a sponge with sour wine, put it on hyssop, and put it to His mouth. So when Jesus had received the sour wine, He said, “It is finished!” And bowing His head, He gave up His spirit.

Three Days in the Earth

1 Peter 3:18–20 (NKJV) For Christ also suffered once for sins, the just for the unjust, that He might bring us to God, being put to death in the flesh but made alive by the Spirit, by whom also He went and preached to the spirits in prison, who formerly were disobedient, when once the Divine longsuffering waited in the days of Noah, while the ark was being prepared, in which a few, that is, eight souls, were saved through water.

Going Down Before Going Up

Ephesians 4:7–10 (NKJV) But to each one of us grace was given according to the measure of Christ’s gift. Therefore He says: “When He ascended on high, He led captivity captive, and gave gifts to men.” (Now this, “He ascended”—what does it mean but that He also first descended into the lower parts of the earth? He who descended is also the One who ascended far above all the heavens, that He might fill all things.)

Revelation 1:17–18 (NKJV) And when I saw Him, I fell at His feet as dead. But He laid His right hand on me, saying to me, “Do not be afraid; I am the First and the Last. I am He who lives, and was dead, and behold, I am alive forevermore. Amen. And I have the keys of Hades and of Death.

1 Corinthians 15:20–28 (NKJV) But now Christ is risen from the dead, and has become the firstfruits of those who have fallen asleep. For since by man came death, by Man also came the resurrection of the dead. For as in Adam all die, even so in Christ all shall be made alive. But each one in his own order: Christ the firstfruits, afterward those who are Christ’s at His coming.

Death is Destroyed in Christ

Then comes the end, when He delivers the kingdom to God the Father, when He puts an end to all rule and all authority and power. For He must reign till He has put all enemies under His feet. The last enemy that will be destroyed is death.

Now Jesus Calls You to the Light

1 Peter 2:9–10 (NKJV) But you are a chosen generation, a royal priesthood, a holy nation, His own special people, that you may proclaim the praises of Him who called you out of darkness into His marvelous light; who once were not a people but are now the people of God, who had not obtained mercy but now have obtained mercy.