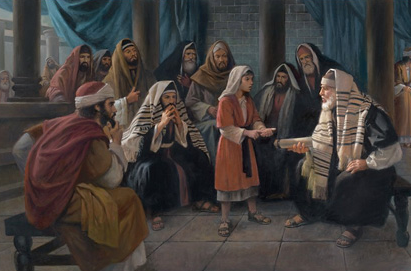 40 And the Child grew and became strong in spirit, filled with wisdom; and the grace of God was upon Him.

41 His parents went to Jerusalem every year at the Feast of the Passover. 42 And when He was twelve years old, they went up to Jerusalem according to the custom of the feast. 43 When they had finished the days, as they returned, the Boy Jesus lingered behind in Jerusalem. And Joseph and His mother did not know it; 44 but supposing Him to have been in the company, they went a day’s journey, and sought Him among their relatives and acquaintances. 45 So when they did not find Him, they returned to Jerusalem, seeking Him. 46 Now so it was that after three days they found Him in the temple, sitting in the midst of the teachers, both listening to them and asking them questions. 47 And all who heard Him were astonished at His understanding and answers. 48 So when they saw Him, they were amazed; and His mother said to Him, “Son, why have You done this to us? Look, Your father and I have sought You anxiously.”
49 And He said to them, “Why did you seek Me? Did you not know that I must be about My Father’s business?” 50 But they did not understand the statement which He spoke to them.

51 Then He went down with them and came to Nazareth, and was subject to them, but His mother kept all these things in her heart. 52 And Jesus increased in wisdom and stature, and in favor with God and men.

The details of Jesus’ childhood are sparse. This passage gives nearly all the details of what happened from the nativity story until His baptism and the beginning of His public ministry. This general initial statement (“He grew and became strong in spirit”) and the conclusion (“He went down with them and came to Nazareth”) frame the one story with detail of His childhood years. At the age of twelve, Jesus’ family traveled to Jerusalem to celebrate the Passover Feast. Once the festival was over, the family packed up to head back to Galilee. As was the norm, the family traveled in a caravan in order to ensure safety and to reduce demands of planning and executing the trip. It would not have been unusual for the family to assume that Jesus was somewhere in the caravan. However, after not seeing Him for a day, they decided to turn back and look for Him in Jerusalem.

After a three day search, they found Him in the temple. Three days of searching led to a strong rebuke from Mary for causing them such anxiety. The scene must have been amazing to Mary, for when she found Him, He was among the teachers and lawyers, learning and discussing in the dialectical style, showing great depth of understanding and insight. Jesus responded with the iconic question: “Did you not know that I must be about My Father’s business?” Other translations say that Jesus had to be in “His Father’s house.” Either way, His parents did not understand the statement, but Mary kept all this in her heart, as she did the events surrounding His birth, and they were revealed and explained by the events of the rest of His life, even leading up to the Pentecost experience of the early church.

This statement of Jesus’ that He must be about His Father’s business, and the simple “Why did you seek Me?” question, are not statements of insubordination, but rather identification. Jesus was making a bold and public statement that He was aware of His destiny and purpose on earth. He was to be about the calling, purpose, and actions for which He was placed on the earth. He was the Christ, the Anointed One, who would save mankind from their sins. This was simply His way of making that known on a small scale to His family and the religious world: I am here, and I am up for the challenge to fulfill the Father’s plan. Jesus’ childhood was described in microcosm here, showing the reader that He was not just another child, yet He was. He was different, but yet submitted to His parents and continued to grow in wisdom and stature, and in favor.