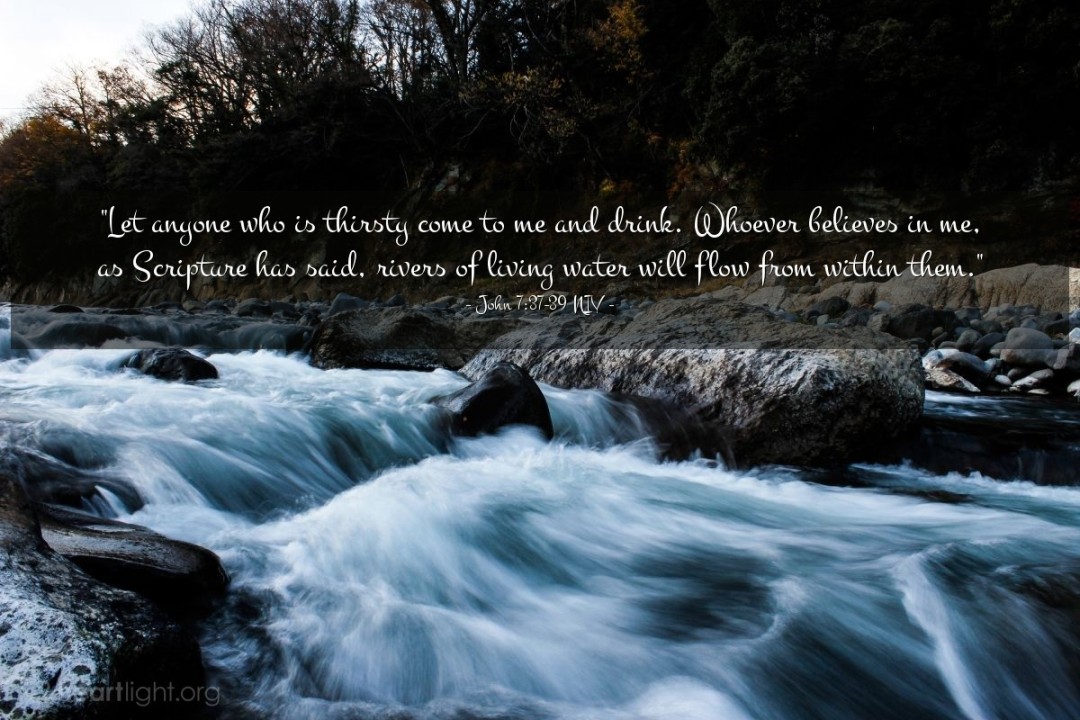 37 On the last day, that great day of the feast, Jesus stood and cried out, saying, “If anyone thirsts, let him come to Me and drink. 38 He who believes in Me, as the Scripture has said, out of his heart will flow rivers of living water.” 39 But this He spoke concerning the Spirit, whom those believing in Him would receive; for the Holy Spirit was not yet given, because Jesus was not yet glorified.

Jesus uses the opportunity of the last day of the feast to explain Himself in light of an activity associated with the end of the feast. On the seventh day of the Feast of Tabernacles, the priests would draw water from the pool of Siloam and process around the altar, not once as on every other day of the feast, but seven times, reminiscent of the march around Jericho. Jesus chose to announce Himself as the source of living water on that occasion, signifying that the water from Siloam was simply a type or symbol of the true water that came from Christ. Those who would believe on Jesus would be filled with the Spirit, and that Spirit would flow to others as an evangelistic river. He typified it as an issue from the heart, signifying the intimate connection between Christ and His believers.

40 Therefore many from the crowd, when they heard this saying, said, “Truly this is the Prophet.” 41 Others said, “This is the Christ.”
But some said, “Will the Christ come out of Galilee? 42 Has not the Scripture said that the Christ comes from the seed of David and from the town of Bethlehem, where David was?” 43 So there was a division among the people because of Him. 44 Now some of them wanted to take Him, but no one laid hands on Him.45 Then the officers came to the chief priests and Pharisees, who said to them, “Why have you not brought Him?”
46 The officers answered, “No man ever spoke like this Man!”
47 Then the Pharisees answered them, “Are you also deceived? 48 Have any of the rulers or the Pharisees believed in Him? 49 But this crowd that does not know the law is accursed.”
50 Nicodemus (he who came to Jesus by night, being one of them) said to them, 51 “Does our law judge a man before it hears him and knows what he is doing?”
52 They answered and said to him, “Are you also from Galilee? Search and look, for no prophet has arisen out of Galilee.”

After Jesus’ assertion that He brought life and salvation, the crowd was divided again, some seeking to take Him and discredit Him, and others being amazed by His authority and speech. Although they wanted to capture Him and take Him to the authorities, but they could not due to His authority and power. A civil war of sorts broke out, as the Jewish leaders accused anyone who did not oppose Jesus of being a Galilean, which was an insult from a proper Jewish Pharisee to signify that someone did not share their pedigree.

This story and the subsequent exchanges among the Jewish people shows the true power and influence of Christ, but also shows the fear, pettiness, and resentment of the Jewish leadership. In the day of the reader of this blog, Jesus is still the great Son of God, the Healer, the Savior. Do not get caught up in the resistance of the culture in which you live. Hold fast to Jesus, no matter what names men or women may hurl at you. He is the One, the Living Water, the Power of God. Drink of Him and be whole!