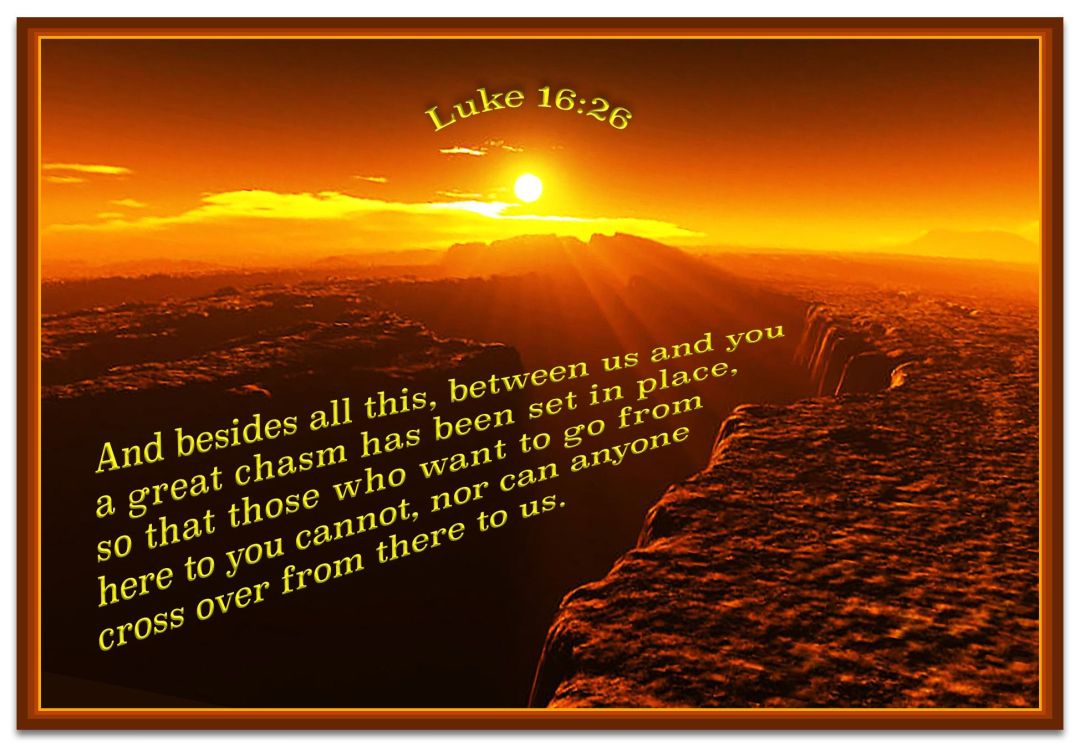 In this passage of Scripture, Jesus discusses the plight of two men who take very different paths and find very different circumstances once they face eternity. He uses their stories to explain the true path to eternal reward.

19 “There was a certain rich man who was clothed in purple and fine linen and fared sumptuously every day. 20 But there was a certain beggar named Lazarus, full of sores, who was laid at his gate, 21 desiring to be fed with the crumbs which fell from the rich man’s table. Moreover the dogs came and licked his sores. 22 So it was that the beggar died, and was carried by the angels to Abraham’s bosom. The rich man also died and was buried. 23 And being in torments in Hades, he lifted up his eyes and saw Abraham afar off, and Lazarus in his bosom.
24 “Then he cried and said, ‘Father Abraham, have mercy on me, and send Lazarus that he may dip the tip of his finger in water and cool my tongue; for I am tormented in this flame.’ 25 But Abraham said, ‘Son, remember that in your lifetime you received your good things, and likewise Lazarus evil things; but now he is comforted and you are tormented.

Jesus juxtaposes the earthly existence of Lazarus and a rich man, speaking of the beggar’s existence of Lazarus as opposed to the lavish life of the other man. While He does not necessarily speak specifically of the spiritual condition of each man, it is assumed that the poor man had to depend on God for His very existence and sustenance, while the rich man depended upon His wealth. This seems to be a continuation of the discussion of wealth initiated by Jesus with the story of the unjust steward at the beginning of the chapter. Jesus continues to discuss the condition of each man’s eternal existence after death. The rich man was in torment in Hades, whereas Lazarus was carried into the “bosom of Abraham,” a place of great comfort and honor for those who served God faithfully.

As the rich man looked up and saw Lazarus, he begged for Lazarus to go and bring water for him to cool his tongue. He still was stuck in his arrogance and pride, looking for the lowly Lazarus to meet his needs instead of the other way around. Abraham reminded the rich man, though, that the tables had turned, and Lazarus’ torment was now over, whereas his had just begun. This is a beautiful picture of the greatness of the reward to be found for those who know Christ. Even if one suffers on earth, they will be comforted and rewarded in the hereafter. Those who trust in riches, however, may find pleasure on earth, but without a relationship with Christ, will be without comfort in death.

26 And besides all this, between us and you there is a great gulf fixed, so that those who want to pass from here to you cannot, nor can those from there pass to us.’ 27 “Then he said, ‘I beg you therefore, father, that you would send him to my father’s house, 28 for I have five brothers, that he may testify to them, lest they also come to this place of torment.’ 29 Abraham said to him, ‘They have Moses and the prophets; let them hear them.’ 30 And he said, ‘No, father Abraham; but if one goes to them from the dead, they will repent.’ 31 But he said to him, ‘If they do not hear Moses and the prophets, neither will they be persuaded though one rise from the dead.’ ”

How did Lazarus and the rich man see each other? There was a great gulf fixed between them, but they were still visible at this time. The place of intimacy with Abraham is presumed to be higher, as the rich man “lifted his eyes,” and was far away. There is a common understanding that the visibility between the two was a pre-resurrection phenomenon, as the Bible describes no such interactions in eschatological literature of the final state of the righteous and wicked dead. However, in this state, there seemed to be a proximity that lent itself to cross-communication, but not the ability to move back and forth between them. Once Jesus descended into the earth after the crucifixion, that separation could have likely occurred. In any case, punishment and reward were definitely present in the afterlife as a foretaste of heaven and hell.

The rich man demonstrated such torment that he additionally begged Abraham to send Lazarus back to plead with his brothers to repent. He told the rich man that if they did not believe the law and prophets that they would not believe a resurrected man either. Therefore, they would need to accept the truth presented to them while on earth. This is true of all of us. Today, individuals have the added privilege of hearing the gospel. Here the word, believe the word, live the word. That is the path to heaven!