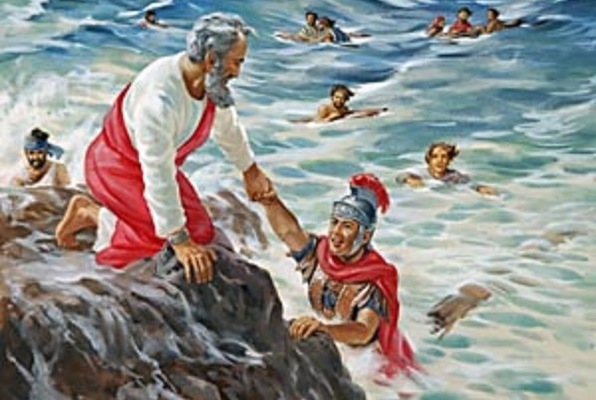 39 When it was day, they did not recognize the land; but they observed a bay with a beach, onto which they planned to run the ship if possible. 40 And they let go the anchors and left them in the sea, meanwhile loosing the rudder ropes; and they hoisted the mainsail to the wind and made for shore. 41 But striking a place where two seas met, they ran the ship aground; and the prow stuck fast and remained immovable, but the stern was being broken up by the violence of the waves.
42 And the soldiers’ plan was to kill the prisoners, lest any of them should swim away and escape. 43 But the centurion, wanting to save Paul, kept them from their purpose, and commanded that those who could swim should jump overboard first and get to land, 44 and the rest, some on boards and some on parts of the ship. And so it was that they all escaped safely to land.

After the storm drove the ship to near disaster and Paul calmed down the ship’s crew, they waited until morning and saw the land. They did not recognize the land, but they did see a bay with a beach. They hoped to be able to allow the ship to run aground on the beach. They cut the anchors away and hoisted the sails and headed for shore. They hit a sandbar and were stuck. The ship was breaking apart, so the soldiers purposed to kill the prisoners. Because of Paul, the centurion stopped them. Everyone then purposed to make it to shore, and they swam and floated on boards until everyone escaped safely to land. Although they had been warned to stay on the ship, they now had to leave the ship in order to be saved.

How can these contrary, contradictory commands be made? God did want them to stay in the ship while the storm raged and land was not visible. Once the light came, though, and they could find their way, then the command came to swim to shore. Whether this be an analogy of leaving earth for heaven, or whether this is speaking of the stages and seasons of life and how we move from one stage to another, this shows us that God’s plan is good, even when it changes. So, continue to trust God no matter what, and He will lead you in safety and power. Even in the shipwrecks of life, trust God, for He will lead you to safety!