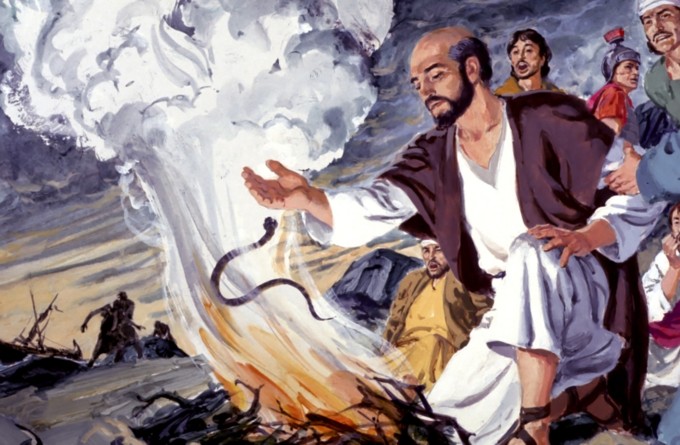 Miracle on Malta; Arrival in Rome

1 Now when they had escaped, they then found out that the island was called Malta. 2 And the natives showed us unusual kindness; for they kindled a fire and made us all welcome, because of the rain that was falling and because of the cold. 3 But when Paul had gathered a bundle of sticks and laid them on the fire, a viper came out because of the heat, and fastened on his hand. 4 So when the natives saw the creature hanging from his hand, they said to one another, “No doubt this man is a murderer, whom, though he has escaped the sea, yet justice does not allow to live.” 5 But he shook off the creature into the fire and suffered no harm. 6 However, they were expecting that he would swell up or suddenly fall down dead. But after they had looked for a long time and saw no harm come to him, they changed their minds and said that he was a god.
7 In that region there was an estate of the leading citizen of the island, whose name was Publius, who received us and entertained us courteously for three days. 8 And it happened that the father of Publius lay sick of a fever and dysentery. Paul went in to him and prayed, and he laid his hands on him and healed him. 9 So when this was done, the rest of those on the island who had diseases also came and were healed. 10 They also honored us in many ways; and when we departed, they provided such things as were necessary.

When the ship settled in on a sand bar off the coast of Malta, even while being smashed by the surf, they swam to shore and were greeted by kind natives. They made a fire and sought to help them combat the rain and the cold. Paul did his part by gathering sticks for the fire. However, when he put his sticks on the fire, a poisonous snake jumped out of the sticks to escape the heat. It bit Paul’s hand and did not let go until Paul shook it off into the fire. The natives pegged Paul as a criminal because this misfortune would not have come upon Paul had he not been evil. They thought for sure that he would swell up and die in no time. However, he lived and showed no negative effects, so they began to think he was some kind of god. This miracle gave Paul status in the community and gave the entire ship favor with the island leaders. What a powerful testimony and miracle for Paul to survive a poisonous snake bite.

The leaders of the island treated everyone well. When the main leader, Publius, told them that his father was sick, Paul prayed for him and he was healed. Many then brought their sick to Paul and they were healed. God honored Paul’s faith and obedience with power to do great things in the name of the Lord. They eventually were able to leave the island of Malta and continue on their journey.

11 After three months we sailed in an Alexandrian ship whose figurehead was the Twin Brothers, which had wintered at the island. 12 And landing at Syracuse, we stayed three days. 13 From there we circled round and reached Rhegium. And after one day the south wind blew; and the next day we came to Puteoli, 14 where we found brethren, and were invited to stay with them seven days. And so we went toward Rome. 15 And from there, when the brethren heard about us, they came to meet us as far as Appii Forum and Three Inns. When Paul saw them, he thanked God and took courage.
16 Now when we came to Rome, the centurion delivered the prisoners to the captain of the guard; but Paul was permitted to dwell by himself with the soldier who guarded him.

Paul eventually came to Rome, and saw many of the brethren of the faith along the way. His heart was encouraged that the work begun earlier was thriving and healthy. When he got to Rome, he received preferential treatment, again finding favor wherever he went, for the Lord was with him. This entire story of Paul’s ministry, his opposition, his mistreatment and his false accusations, points to the favor of God as Paul obeyed the Lord. What an example to us today. Follow the Lord’s leadership, even if it takes you through the valley of the shadow of death, and do not fear, for the Lord is with you. David knew it. Paul lived it. Know it for yourself today, for it is true.