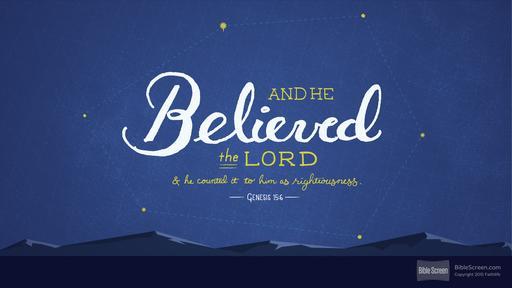 13 For the promise that he would be the heir of the world was not to Abraham or to his seed through the law, but through the righteousness of faith. 14 For if those who are of the law are heirs, faith is made void and the promise made of no effect, 15 because the law brings about wrath; for where there is no law there is no transgression.
16 Therefore it is of faith that it might be according to grace, so that the promise might be sure to all the seed, not only to those who are of the law, but also to those who are of the faith of Abraham, who is the father of us all 17 (as it is written, “I have made you a father of many nations”) in the presence of Him whom he believed—God, who gives life to the dead and calls those things which do not exist as though they did; 18 who, contrary to hope, in hope believed, so that he became the father of many nations, according to what was spoken, “So shall your descendants be.” 19 And not being weak in faith, he did not consider his own body, already dead (since he was about a hundred years old), and the deadness of Sarah’s womb. 20 He did not waver at the promise of God through unbelief, but was strengthened in faith, giving glory to God, 21 and being fully convinced that what He had promised He was also able to perform. 22 And therefore “it was accounted to him for righteousness.”
23 Now it was not written for his sake alone that it was imputed to him, 24 but also for us. It shall be imputed to us who believe in Him who raised up Jesus our Lord from the dead, 25 who was delivered up because of our offenses, and was raised because of our justification.

Paul writes here further insight into the faith of Abraham. He leaves the discussion of circumcision, and instead focuses on the faith of Abraham in his belief in an heir after he was old. Paul shows that the law is simply to reveal transgression. The law “brings about wrath.” In other words, the law reveals sin, which requires the wrath of God to punish it. Faith, however, leads to grace, which saves anyone, whether of the culture of law or not. This opens up salvation to all people, Jew and Gentile alike. Abraham was promised a son by God. Abraham was about 100 years old, and his wife was beyond child-bearing years as well. Therefore, it required great faith for Abraham to believe for this son to be born.

The fact that Abraham believed made him righteous, not the fact that he kept the law of Moses, which came much, much later. Now, anyone who believes on the Lord Jesus Christ will be saved, in the same way that Abraham’s faith brought about his salvation. Therefore, grace is given in response to faith, and the law simply points us to right living, not salvation. While they are intermingled, they are not the same. Right living should be a result or by-product of salvation by grace through faith, not the path to that salvation. Get right with God and He will help you get right with your living!