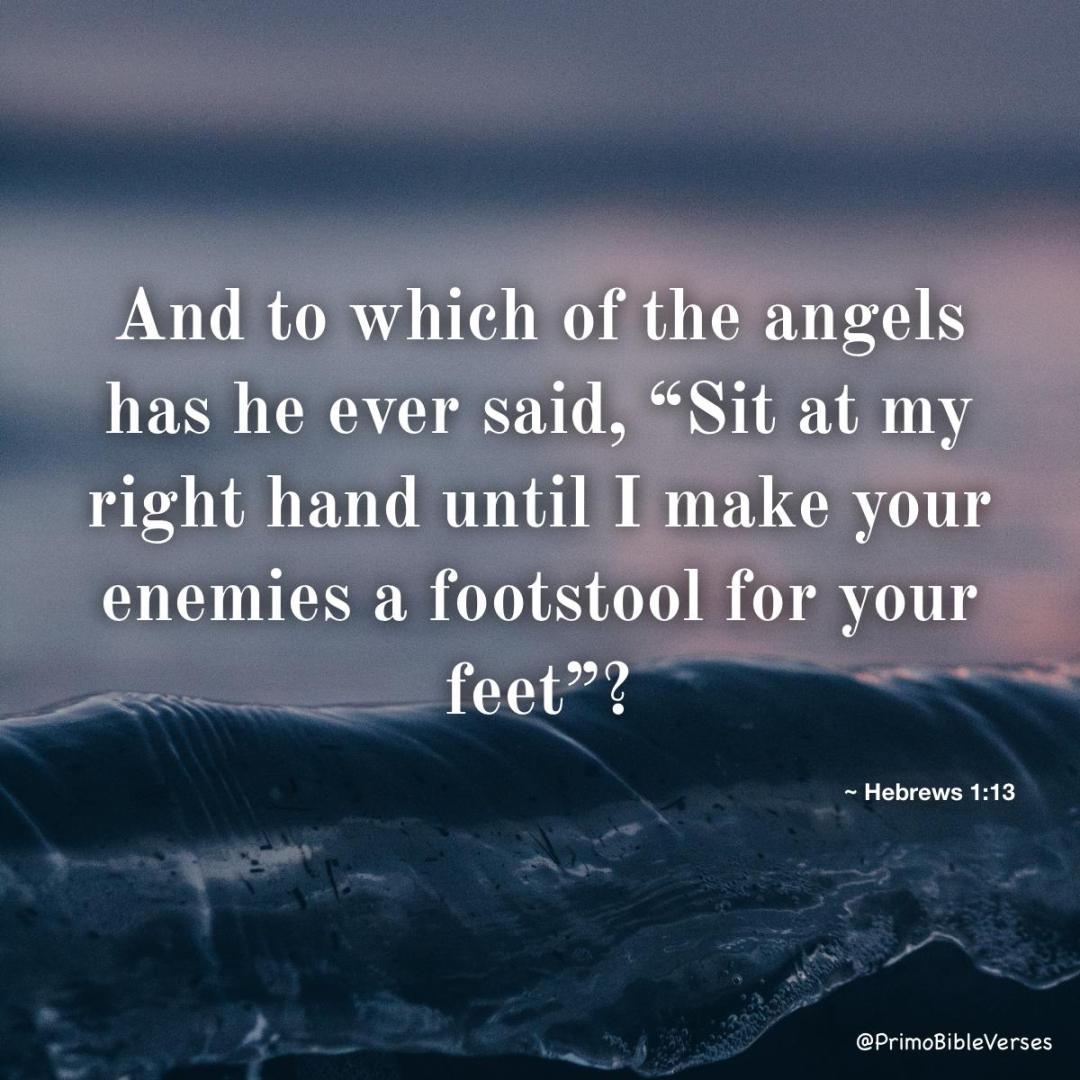 In this passage, the writer of Hebrews continues his apologetic on the validity of Christ as the Messiah. He appeals to the prophets for affirmation of His place in the Godhead.

5 For to which of the angels did He ever say:

“You are My Son,
Today I have begotten You”?

6 But when He again brings the firstborn into the world, He says: “Let all the angels of God worship Him.”

7 And of the angels He says:

“Who makes His angels spirits
And His ministers a flame of fire.”

In these references to the prophets (Psalms, 2 Samuel, Deuteronomy) , the writer established the place of the Son of God, alluding to prophecies about the deity of Christ (You are My Son), the Sonship of Christ (I will be to Him a Father), and the relationship of Christ to the angels (they worship Him and are His messengers). These passages make it clear that Jesus Christ, the fulfillment of these prophetic words, is the Messiah. There is a clear connection and relationship between the Father and the Son, establishing His deity, and there is a clear distinction between Jesus and the angels, establishing Him as God and the angels as His servants.

“Your throne, O God, is forever and ever;
A scepter of righteousness is the scepter of Your kingdom.
9 You have loved righteousness and hated lawlessness;
Therefore God, Your God, has anointed You
With the oil of gladness more than Your companions.”

“You, LORD, in the beginning laid the foundation of the earth,
And the heavens are the work of Your hands.
11 They will perish, but You remain;
And they will all grow old like a garment;
12 Like a cloak You will fold them up,
And they will be changed.
But You are the same,
And Your years will not fail.”
13 But to which of the angels has He ever said:
“Sit at My right hand,
Till I make Your enemies Your footstool”?

14 Are they not all ministering spirits sent forth to minister for those who will inherit salvation?

In these passages from Psalms, Isaiah, and Daniel, the author of Hebrews further establishes the deity of Christ, expanding the prior section’s assertion of His deity, His Sonship, and His relation to the angels. He declares the right of Christ to the throne in heaven, calls Him immortal and eternal, establishes Him as holy and righteous. He also characterizes the anointing of Jesus to be greater than that of all His companions. He reaffirms Jesus’ role in the creation of the world and the heavens, and His continuing Lordship over all of creation. Earth will one day perish, but Christ will remain. He will be there at the end of the earth to fold it up like an old garment or cloak. The earth will change, but Christ will remain the same forever. Again referring to the angels, the writer asks if any of the angels had ever been offered the opportunity to sit at the right hand of the Father. The obvious answer is that no angel has even been afforded that opportunity, only Christ. When an angel attempted to ascend to the place of God (Lucifer), he was cast out of heaven. The angels are ministering spirits, sent at the behest of God, servants ministering to God’s children.

This representative sampling of prophecies concerning Christ serve to build a strong argument for the deity of Christ and the role of Christ in salvation. Let man never be guilty of placing another in the seat of Christ. Men and women should always worship the true God, not false gods, idols, other human beings, or even one’s self. There is only one God, and only one Savior, Jesus Christ the Lord. Worship Him only and declare His deity and His salvific work to all who will hear. Jesus is Lord and He is Savior. Worship the Son Superior!