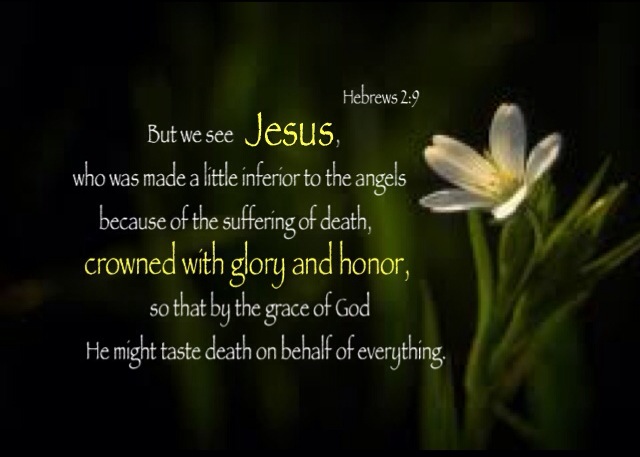 A Little Lower Than the Angels

The writer here transitions from a discussion of Jesus’ validity as the Messiah to a discussion of the proper reaction of mankind to this revelation of Christ. He asserts the importance of man’s humble and diligent reaction to this powerful message, and tells how men and women everywhere should respond to the knowledge that Jesus is Lord.

1 Therefore we must give the more earnest heed to the things we have heard, lest we drift away. 2 For if the word spoken through angels proved steadfast, and every transgression and disobedience received a just reward, 3 how shall we escape if we neglect so great a salvation, which at the first began to be spoken by the Lord, and was confirmed to us by those who heard Him, 4 God also bearing witness both with signs and wonders, with various miracles, and gifts of the Holy Spirit, according to His own will?

The author of this letter makes an emphatic assertion: “we must give the more earnest heed to the things we have heard….” He implores the readers, Jews or Gentiles who have accepted Christ as their Savior, to be even more diligent to hear, believe, and act upon the truth of Christ. This is imperative in order to maintain a proper walk with God. We must give heed to the message to avoid drifting away from our faith. Rhetorically, the writer asks “if the word spoken through angels proved steadfast.” He obviously believes that the prophecies written long before are valid, which speak of transgression and disobedience being given a just reward. The believer will not escape if he or she neglects this great salvation offered through the gospel of Jesus Christ. This gospel was first spoken by the Lord, then confirmed by the witnesses to His message and ministry. God bore witness of the deity of Christ and the power of the gospel with signs and wonders, miracles, and the great gifts of the Holy Spirit. God willed the message of the cross to go forth, confirming it and overseeing the preservation and communication of it. God has always had a plan for the salvation of mankind, and that plan revolves around Jesus Christ and His completed work on the cross. Jesus died, rose again, and ascended to heaven to intercede for women and men everywhere. Do not drift away by attending to the temptations of the devil. If you do, you will not escape judgment. Instead, keep your eyes on Christ alone.

5 For He has not put the world to come, of which we speak, in subjection to angels. 6 But one testified in a certain place, saying:

“What is man that You are mindful of him,
Or the son of man that You take care of him?
7 You have made him a little lower than the angels;
You have crowned him with glory and honor,
And set him over the works of Your hands.
8 You have put all things in subjection under his feet.”

For in that He put all in subjection under him, He left nothing that is not put under him. But now we do not yet see all things put under him. 9 But we see Jesus, who was made a little lower than the angels, for the suffering of death crowned with glory and honor, that He, by the grace of God, might taste death for everyone.

The writer makes further comparison between Jesus and the angels in verse 5. God has not put the world to come in subjection to the angels. No, God has given the Son the authority over all the earth, especially at the second coming of the Lord. However, in His incarnation, Jesus came as a man, a little lower than the angels. Job asked the question which is quoted here,”“What is man that You are mindful of him?” The psalmist took it a step further, asking why the Lord would take care of the son of man. The author of Hebrews uses this to describe the condescension of Christ to earth, calling Him the son of man, descended to earth to walk among men and redeem them. He laid aside His glory, as the writer of Philippians said, to walk among men. This voluntary action of Christ led to His eventual elevation, described by the crowning of Christ with glory and honor, and the setting of Christ over all creation, subjected under His feet. To be very certain, the author reiterates that all was put in subjection under Christ, so that nothing is not under Him. When Christ won total victory over death and hell, nothing was left outside the dominion of Jesus Christ.

Although we cannot see all things put under Him in our world today, that subjection will be revealed at the second coming of Christ. What we do see before us is Jesus, made a little lower than the angels and suffering death, now crowned with glory and honor. He tasted death for every man and woman and, by the grace of God, we can be saved through Him. Do not neglect this great salvation. Do not stray from the faith. Keep the faith, for there will be no escape for those who stray. Jesus was made a little lower than the angels so that He could die in our place. Be thankful, be diligent, be committed. This is the only WAY.