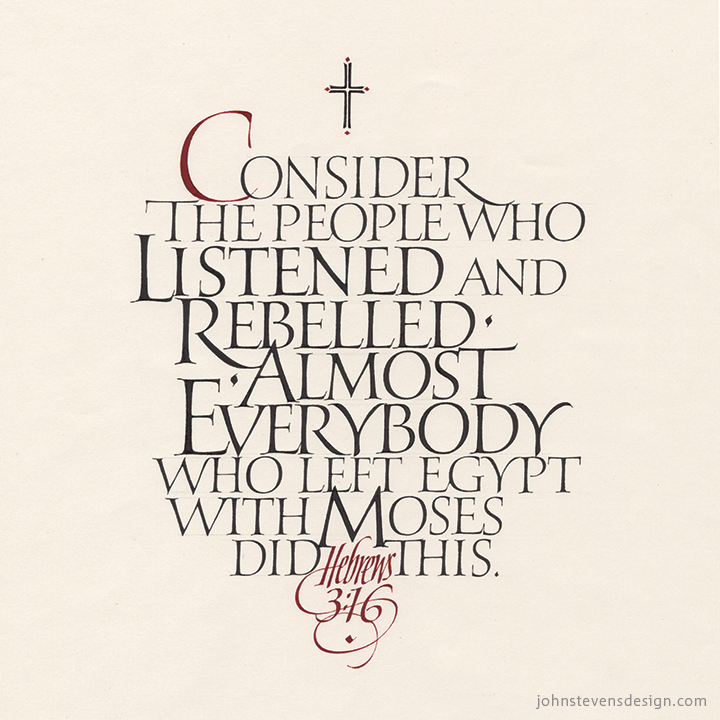 The failures of the children of Israel are well-documented throughout their history, even though they were considered God’s Chosen People. One of their greatest failures was their lack of faith to believe that God would deliver the promised land into their hands. Spies went in the see the land and came back with glowing reports of the vegetation and water, but they feared the giants in the land. That lack of faith led to the conditions faced by Israel that are described below.

16 For who, having heard, rebelled? Indeed, was it not all who came out of Egypt, led by Moses? 17 Now with whom was He angry forty years? Was it not with those who sinned, whose corpses fell in the wilderness? 18 And to whom did He swear that they would not enter His rest, but to those who did not obey? 19 So we see that they could not enter in because of unbelief.

The writer declares that all the people of Israel who came out of Egypt heard the commands of God, but yet rebelled against His commands and His promises to give them the land. With who else would God be angry for forty years? Wouldn’t it have to be those sinners, who died in the wilderness and whose bodies were buried in shallow graves and left behind? The resounding answers to these rhetorical questions say it was the disobedient Israelites with whom God was angry, and it was those sinners who died in the wilderness. God swore that they would not enter His rest due to their disobedience. Their unbelief disqualified them from entry into Canaan, the land promised long ago to Abraham.

What does this message say to us today? Whereas the Israelites were comparing their military might to that of the Canaanites, they should have been comparing the power and might of their God, Jehovah, to the gods of the natives of the land. Obviously, their God was greater than the gods of the inhabitants of Canaan. He had liberated them from Egypt through miraculous plagues against Egypt. He had parted the Red Sea to allow them to walk across on dry land, and then drowned the elite Egyptian army in the midst of the same sea. He supplied them manna to eat, water from a rock, healed the bitter waters of Marah, and sent quail for them to catch and eat. He preserved their clothing and shoes without them wearing out for forty years. They received the ten commandments by a divine revelation on Mt. Sinai. What else did they need to believe that God could give them the land He had already promised? What do we need to be able to believe that God can deliver what He promised us? The people of God must believe. As a matter of fact, that is all we can do is believe. No amount of intelligence, ingenuity, strength, or ability can get any individual everything they need. But God can. Don’t set yourself up for a period of wilderness wandering. It is long, dry, and hot out there, and there is no rest in sight….