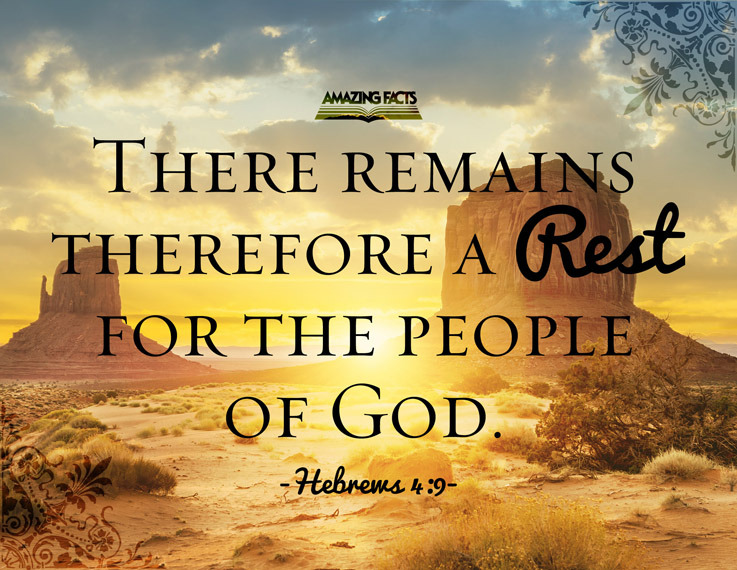 After a few passages discussing the failures of Israel in the wilderness, the writer here turns to a more hopeful message. He has warned against disobedience and rebellion, and has enumerated the consequences (death, no promised land, no rest). But now he says “a promise remains.” There is hope, and the remedy is spelled out in this passage.

1 Therefore, since a promise remains of entering His rest, let us fear lest any of you seem to have come short of it. 2 For indeed the gospel was preached to us as well as to them; but the word which they heard did not profit them, not being mixed with faith in those who heard it. 3 For we who have believed do enter that rest, as He has said:

although the works were finished from the foundation of the world. 4 For He has spoken in a certain place of the seventh day in this way: “And God rested on the seventh day from all His works”; 5 and again in this place: “They shall not enter My rest.”

The writer opens with the hopeful line, “a promise remains of entering His rest.” This is a stark change from the gloom and doom of those who died in the wilderness, never seeing the rest they sought. He still warns against coming short of obedience and reward, but yet there seems to be a bright glimmer of hope for that promised rest to be obtained. Those reading this letter have heard the gospel preached, as did those in the wilderness. However, those in the wilderness did not profit them, for they chose not to believe it. It was not mixed with faith, but rather with doubt. Although the speech of the last paragraph is a bit ambiguous, the message is clear: they did not enter that rest, but those of us who believe shall enter His rest.

6 Since therefore it remains that some must enter it, and those to whom it was first preached did not enter because of disobedience, 7 again He designates a certain day, saying in David, “Today,” after such a long time, as it has been said:

“Today, if you will hear His voice,
Do not harden your hearts.”

8 For if Joshua had given them rest, then He would not afterward have spoken of another day. 9 There remains therefore a rest for the people of God. 10 For he who has entered His rest has himself also ceased from his works as God did from His.

The writer goes back to revisit the “today” reference. Some must enter the rest of the Lord, even though those who first heard the word did not enter because of their disobedience to God. Today, though, if you will hear (listen to and obey) the voice of God, then do not harden your hearts! God rested from His labors on the seventh day. Joshua led the Israelites into the promised land after the forty years of wandering in the wilderness, but even then Joshua spoke of another day of rest, as if their work was not complete. The writer of Hebrews offers the promise that there does remain a rest for the people of God. The promised land for those of us who worship Christ today is not land as in the earthly sense, but rather the eternal rest found in heaven that is available to those who have completed their work on earth. We do not determine that time, but God does. We do not book a ticket for a particular day, but we simply make ourselves available for the appointment God has for us, and we work until He calls us home.

Learn from the mistakes of those gone before you. Learn from your own mistakes. Learn from the wise who blazed the trail for years. Learn from your peers. Learn from your children. But above all, learn how to live for Christ all the days of your life. Although you may never get it perfect, give Him your heart and He will guide you home. One of my favorite songs of recent days is The Father’s House by Corey Asbury. The lyrics in the second verse read, “Arrival’s not the end game, the journey’s where you are. You never wanted perfect, You just wanted my heart. The story isn’t over if the story isn’t good, ‘cause failure’s never final when the Father’s in the room.” I don’t believe in hyper-grace, but I do believe in amazing grace. Grow in the grace and knowledge of our Lord Jesus Christ and never stop working. He is looking for laborers in the harvest, and it’s the best job you can find. It the only job with a promise of eternal rest.