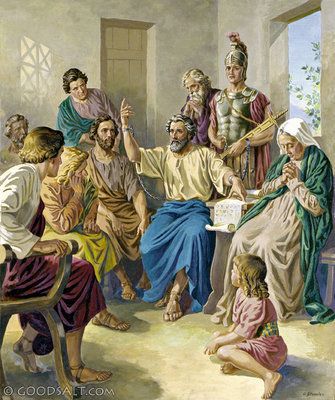 17 And it came to pass after three days that Paul called the leaders of the Jews together. So when they had come together, he said to them: “Men and brethren, though I have done nothing against our people or the customs of our fathers, yet I was delivered as a prisoner from Jerusalem into the hands of the Romans, 18 who, when they had examined me, wanted to let me go, because there was no cause for putting me to death. 19 But when the Jews spoke against it, I was compelled to appeal to Caesar, not that I had anything of which to accuse my nation. 20 For this reason therefore I have called for you, to see you and speak with you, because for the hope of Israel I am bound with this chain.”
21 Then they said to him, “We neither received letters from Judea concerning you, nor have any of the brethren who came reported or spoken any evil of you. 22 But we desire to hear from you what you think; for concerning this sect, we know that it is spoken against everywhere.”

After arriving in Rome, Paul did just as he did everywhere he went to spread the gospel of Jesus Christ: He called for the Jewish leaders and people in the city. This would be Paul’s final frontier (Rome) in this journey. Acts does not tell the reader what happened at the end of Paul’s imprisonment in Rome. Some speculate that he was tried and executed. Others suppose that he was released and had ministry post-Rome for a few years, and then was arrested and martyred under Nero’s rule. Either way, this was–geographically, culturally, and politically–Paul’s final frontier. He continued to follow his previous pattern and way of ministering, by going to the Jews first and then the Gentiles. After sending for the Jews, he received a favorable response, even though there was a hint of resistance in verse 22, in there statement that everyone else says your sect is not right.

23 So when they had appointed him a day, many came to him at his lodging, to whom he explained and solemnly testified of the kingdom of God, persuading them concerning Jesus from both the Law of Moses and the Prophets, from morning till evening. 24 And some were persuaded by the things which were spoken, and some disbelieved. 25 So when they did not agree among themselves, they departed after Paul had said one word: “The Holy Spirit spoke rightly through Isaiah the prophet to our fathers, 26 saying, ‘Go to this people and say:
“Hearing you will hear, and shall not understand;
And seeing you will see, and not perceive;
27 For the hearts of this people have grown dull.
Their ears are hard of hearing,
And their eyes they have closed,
Lest they should see with their eyes and hear with their ears,
Lest they should understand with their hearts and turn,
So that I should heal them.” ’ 28 “Therefore let it be known to you that the salvation of God has been sent to the Gentiles, and they will hear it!” 29 And when he had said these words, the Jews departed and had a great dispute among themselves.

The appointed day arrived, and many of the Jews came to Paul’s residence in Rome where he served under house arrest. Paul preached and taught of Jesus, with some believing and others refusing the gospel. In the midst of this disagreement, Paul quoted Isaiah to affirm that this was seen and prophesied by God through him years ago. Some will be dull of hearing and refuse Christ. It is still happening today! So Paul declared that because of the Jews unbelief, and because of God’s inclusive gospel of Christ, that he would also preach this gospel to the Gentiles. At this “absurd” statement, the Jews left, and continued their dispute along the way.

30 Then Paul dwelt two whole years in his own rented house, and received all who came to him, 31 preaching the kingdom of God and teaching the things which concern the Lord Jesus Christ with all confidence, no one forbidding him.

It was then that Paul set up shop, just as in every other city in which he ministered, to receive anyone that would come to him to inquire about Christ. He won many, and was there for two years, spreading the gospel to the final frontier, the “ends of the earth.” I concur with the scholars that he was eventually released and ministry a few more years after Rome, and then was martyred at a later date. However, this would be Paul’s crowning achievement, that he went into the very capitol of the Gentile world and declared Christ with power, boldness, and anointing, and won a harvest. Lord, help the church of today to have that same attitude, and help us go into the heart of the lost cultures and civilizations of this earth and declare you to the masses. You are our message. May the Acts of the Apostles continue through us in these last days! May we go into the final frontier to share Jesus Christ with all who will hear.