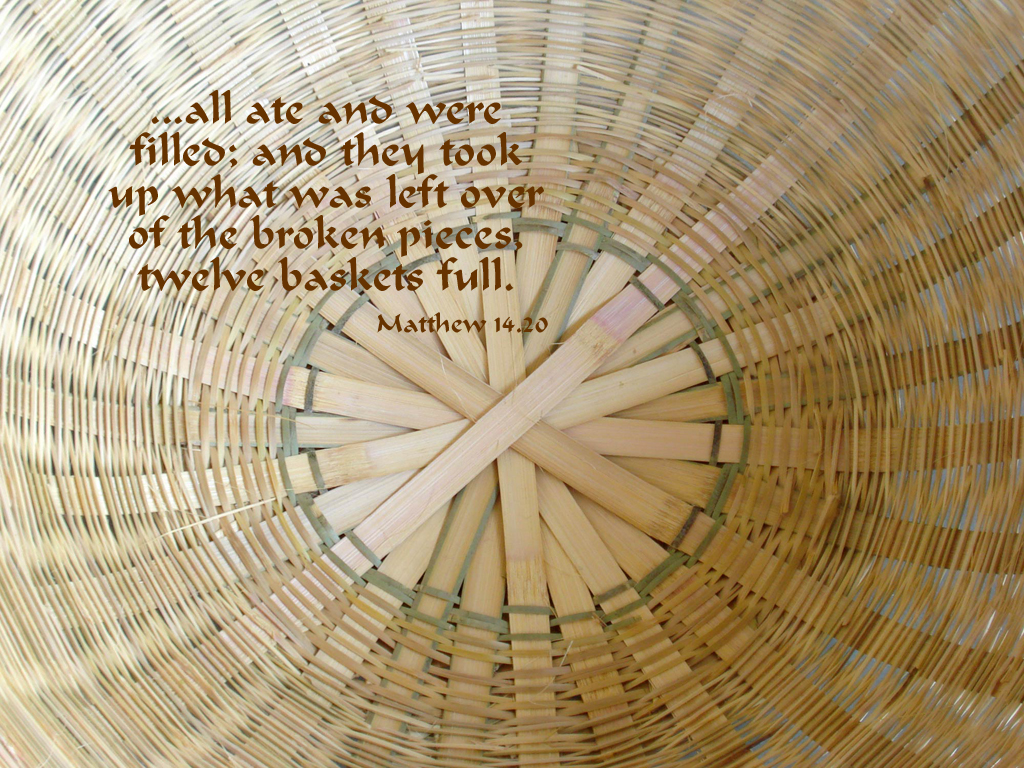 13 When Jesus heard it, He departed from there by boat to a deserted place by Himself. But when the multitudes heard it, they followed Him on foot from the cities. 14 And when Jesus went out He saw a great multitude; and He was moved with compassion for them, and healed their sick. 15 When it was evening, His disciples came to Him, saying, “This is a deserted place, and the hour is already late. Send the multitudes away, that they may go into the villages and buy themselves food.”

16 But Jesus said to them, “They do not need to go away. You give them something to eat.”

17 And they said to Him, “We have here only five loaves and two fish.”

18 He said, “Bring them here to Me.” 19 Then He commanded the multitudes to sit down on the grass. And He took the five loaves and the two fish, and looking up to heaven, He blessed and broke and gave the loaves to the disciples; and the disciples gave to the multitudes. 20 So they all ate and were filled, and they took up twelve baskets full of the fragments that remained. 21 Now those who had eaten were about five thousand men, besides women and children.

This powerful story of Jesus’ miraculous provision for a large congregation of people demonstrates many things, including His power over natural law.  Natural law says that matter cannot be created, only converted.  Chemical reactions can combine or separate elements.  Heat and cold can cause phase change (solid to liquid to gas and vice versa).  But matter cannot be created from thin air.  There must be something there to begin with or matter cannot appear.  There must be hydrogen and oxygen to combine, or water will not exist.  But Jesus showed that He had creative power in this story, to bring something from nothing (creation ex nihilo).

The disciples felt that the people needed encouragement to go and buy food for their families.  Logically, this made sense, and would have been a compassionate gesture.  But in this case, Jesus–in His compassion and care for the multitude–took a small meal and created more.  As He blessed and broke the bread and fish, more and more came from His hands, and everyone was fed.  A crowd of 5000 men could have represented at least 20,000 people total, and they all were fed with 12 baskets left over.  Some speculate that the leftovers were a sign to the 12 disciples, to show them the amazing power of Christ to know and produce even the number of baskets that would feed the disciples from the leftovers.  Other scholars suggest that this is a Messianic statement, showing that Jesus was the Messiah in the fact that the twelve baskets could signify His provision and Lordship for the twelve tribes of Israel.

This story demonstrates that Jesus is able to create all that we need and more.  He is not limited, He is not restricted.  Jesus’ power is unfettered, unchained, unlimited.  He is God Almighty, El Shaddai, the Lord God Omnipotent.  He provided for the 5000 and He will provide for you.  So believe and be at peace, for Jesus is more than enough!